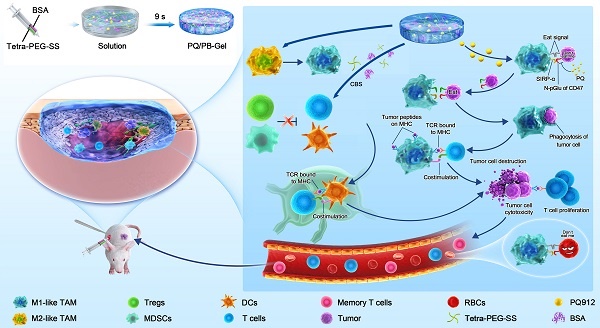 Rationale: Many cancers have evolved different mechanisms to evade immune surveillance. Macrophages, the innate defense of the immune system, are limited in their phagocytosis by CD47 anti-phagocytic signaling expressed on the surface of tumor cells. Although the CD47 monoclonal antibody (aCD47) strategy has been extensively studied in clinical trials, the depletion of aCD47 by red blood cells (RBCs) and the resulting hematotoxicity have impeded their application in tumor treatment.

Results: PQ/PB-Gel had excellent effect on inhibiting local recurrence of two kinds of tumors. The hydrogel system inhibited the generation of “don't eat me” signals during the treatment cycle by inhibiting the expression of newly generated neoplastic CD47. Thus, it avoided adverse reactions such as erythrocytopenia after the use of aCD47 in terms of safety. After the “don't eat me” signal was blocked the clearance and recognition of cancer cells by macrophages and antigen-presenting cells were enhanced, sequentially systemic immune response was activated and further memory T lymphocyte (T cell) formation was induced.

Conclusions: PQ/PB-Gel had a simple preparation and administration method, low production cost, excellent efficacy and low toxicity, so it had good practicability. This might provide a safe alternative strategy for aCD47 for inhibit local tumor recurrence and distal metastasis in postoperative immunotherapy.