Inflammatory endothelium-targeted and cathepsin responsive nanoparticles are effective against atherosclerosis 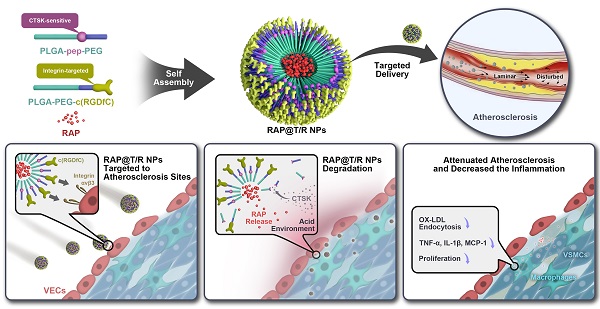 Rationale: Atherosclerosis is characterized by lipid accumulation, plaque formation, and artery stenosis. The pharmacological treatment is a promising therapy for atherosclerosis, but this approach faces major challenges such as targeted drug delivery, controlled release, and non-specific clearance.

Methods: Based on the finding that the cathepsin k (CTSK) enzyme is enriched in atherosclerotic lesions, we constructed an integrin αvβ3 targeted and CTSK-responsive nanoparticle to control the release of rapamycin (RAP) locally. The targeted and responsive nanoparticles (T/R NPs) were engineered by the self-assembly of a targeting polymer PLGA-PEG-c(RGDfC) and a CTSK-sensitive polymer PLGA-Pep-PEG. PLGA-Pep-PEG was also modified with a pair of FRET probe to monitor the hydrolysis events.

Results: Our results indicated that RAP@T/R NPs accelerated the release of RAP in response to CTSK stimulation in vitro, which significantly inhibited the phagocytosis of OxLDL and the release of cytokines by inflammatory macrophages. Additionally, T/R NPs had prolonged blood retention time and increased accumulation in the early and late stage of atherosclerosis lesions. RAP@T/R NPs significantly blocked the development of atherosclerosis and suppressed the systemic and local inflammation in ApoE-/- mice.

Conclusions: RAP@T/R NPs hold a great promise as a drug delivery system for safer and more efficient therapy of atherosclerosis.