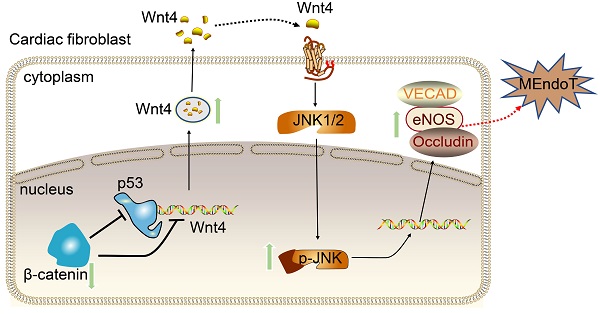 Rational: Wnt4 plays a critical role in development and is reactivated during fibrotic injury; however, the role of Wnt4 in cardiac repair remains unclear. In this study, our aim was to clarify the pathophysiological role and mechanisms of Wnt4 following acute cardiac ischemic reperfusion injury.

Methods and results: We investigated the spatio-temporal expression of Wnt4 following acute cardiac ischemic reperfusion injury and found that Wnt4 was upregulated as an early injury response gene in cardiac fibroblasts near the injury border zone and associated with mesenchymal-endothelial transition (MEndoT), a beneficial process for revascularizing the damaged myocardium in cardiac repair. Using ChIP assay and in vitro and in vivo loss- and gain-of-function, we demonstrated that Wnt4 served as a crucial downstream target gene of p53 during MEndoT. Wnt4 knockdown in cardiac fibroblasts led to decreased MEndoT and worsened cardiac function. Conversely, Wnt4 overexpression in cardiac fibroblasts induced MEndoT in these cells via the phospho-JNK/JNK signaling pathway; however, both the p53 and Wnt4 protein levels were dependent on the β-catenin signaling pathway. JNK activation plays a critical role in the induction of MEndoT and is crucial for Wnt4 regulated MEndoT. Moreover, Wnt4 overexpression specifically in cardiac fibroblasts rescued the cardiac function worsening due to genetic p53 deletion by decreasing fibrosis and increasing MEndoT and vascular density.

Conclusion: Our study revealed that Wnt4 plays a pivotal role in cardiac repair with involvement of phospho-JNK mediated MEndoT and is a crucial gene for cardiac fibroblast-targeted therapy in heart disease.