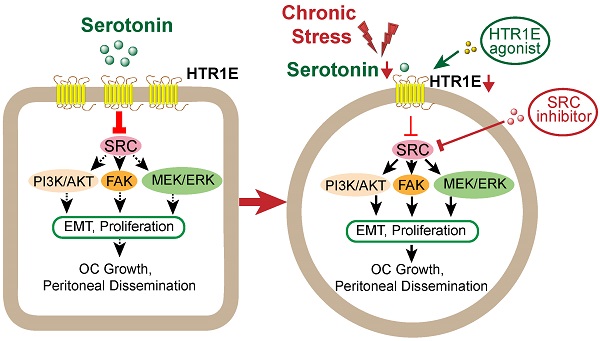 Rationale: Psychological stress has been linked to cancer development and resistance to therapy by many epidemiological and clinical studies. Stress-induced immunosuppressive microenvironment by stress hormones, in particular glucocorticoids, has been extensively studied. However, the impacts of other stress-related neurotransmitters, such as serotonin (5-hydroxytryptamine, 5-HT), on cancer development just start to be revealed. Here, we aimed to identify novel neurotransmitters involved in stress-induced growth and dissemination of ovarian cancer (OC) and reveal the major underlying signaling pathway and the therapeutic significance.

Methods: Through a genome-wide CRISPR/Cas9 knockout screen in the murine orthotopic model of ovarian carcinoma (OC), we identified candidate genes regulating the peritoneal dissemination of OC. Among them, we picked out HTR1E, one member of 5-HT receptor family specifically expressed in the ovary and endometrium in addition to brain. The correlation of HTR1E expression with OC progression was analyzed in OC patient specimen by quantitative reverse transcription polymerase chain reaction (qRT-PCR), western blot, and immunohistochemistry (IHC). Gain-of-function and loss-of-function analyses were performed to explore the functions of 5-HT/HTR1E signaling in OC growth and dissemination in vitro and in vivo. In addition, we investigated the therapeutic values of HTR1E specific agonist and small molecular inhibitors against HTR1E downstream factor SRC in a stressed murine OC xenograft model.

Results: In OC patients, the HTR1E expression is dramatically decreased in peritoneal disseminated OC cells, which correlates with poor clinical outcome. Silence of HTR1E in OC cells greatly promotes cell proliferation and epithelial mesenchymal transition (EMT) by the activation of SRC-mediated downstream signaling pathways. Furthermore, chronic stress results in significantly decreased serotonin in the ovary and the enhanced OC growth and peritoneal dissemination in mice, which can be strongly inhibited by specific HTR1E agonist or the SRC inhibitor.

Conclusions: We discovered the essential role of serotonin/HTR1E signaling in preventing the chronic psychological stress-promoted progression of OC, suggesting the potential therapeutic value of the HTR1E specific agonist and the SRC inhibitor for OC patients who are suffering from psychological stress.