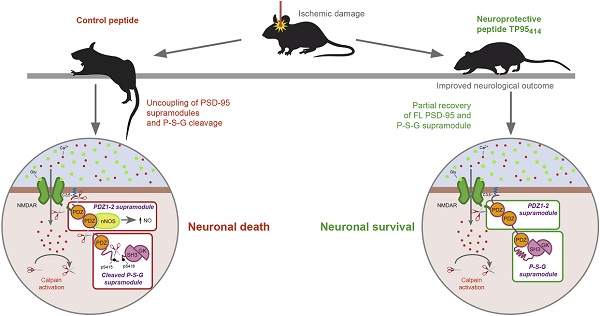 Postsynaptic density protein-95 (PSD-95) is a multidomain protein critical to the assembly of signaling complexes at excitatory synapses, required for neuronal survival and function. However, calpain-processing challenges PSD-95 function after overactivation of excitatory glutamate receptors (excitotoxicity) in stroke, a leading cause of death, disability and dementia in need of efficient pharmacological treatments. A promising strategy is neuroprotection of the infarct penumbra, a potentially recoverable area, by promotion of survival signaling. Interference of PSD-95 processing induced by excitotoxicity might thus be a therapeutic target for stroke and other excitotoxicity-associated pathologies.

Methods: The nature and stability of PSD-95 calpain-fragments was analyzed using in vitro assays or excitotoxic conditions induced in rat primary neuronal cultures or a mouse model of stroke. We then sequenced PSD-95 cleavage-sites and rationally designed three cell-penetrating peptides (CPPs) containing these sequences. The peptides effects on PSD-95 stability and neuronal viability were investigated in the cultured neurons, subjected to acute or chronic excitotoxicity. We also analyzed the effect of one of these peptides in the mouse model of stroke by measuring infarct size and evaluating motor coordination and balance.