Prodromal neuroinflammatory, cholinergic and metabolite dysfunction detected by PET and MRS in the TgF344-AD transgenic rat model of AD: a collaborative multi-modal study 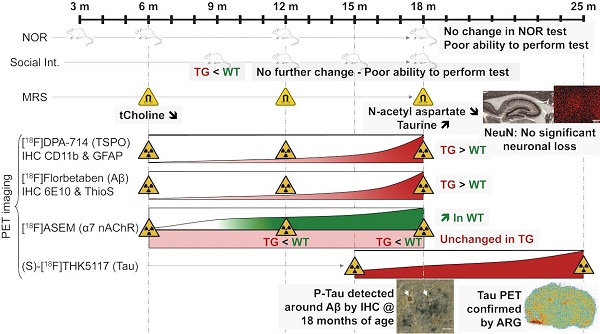 Mouse models of Alzheimer's disease (AD) are valuable but do not fully recapitulate human AD pathology, such as spontaneous Tau fibril accumulation and neuronal loss, necessitating the development of new AD models. The transgenic (TG) TgF344-AD rat has been reported to develop age-dependent AD features including neuronal loss and neurofibrillary tangles, despite only expressing APP and PSEN1 mutations, suggesting an improved modelling of AD hallmarks. Alterations in neuronal networks as well as learning performance and cognition tasks have been reported in this model, but none have combined a longitudinal, multimodal approach across multiple centres, which mimics the approaches commonly taken in clinical studies. We therefore aimed to further characterise the progression of AD-like pathology and cognition in the TgF344-AD rat from young-adults (6 months (m)) to mid- (12 m) and advanced-stage (18 m, 25 m) of the disease.

Results: [18F]DPA-714 positron emission tomography (PET) showed an increase in neuroinflammation in TG vs wildtype animals from 12 m in the hippocampus (+11%), and at the advanced-stage AD in the hippocampus (+12%), the thalamus (+11%) and frontal cortex (+14%). This finding coincided with strong increases in brain microgliosis (CD11b) and astrogliosis (GFAP) at these time-points as assessed by immunohistochemistry. In vivo [18F]ASEM PET revealed an age-dependent increase uptake in the striatum and pallidum/nucleus basalis of Meynert in WT only, similar to that observed with this tracer in humans, resulting in TG being significantly lower than WT by 18 m. In vivo [18F]Florbetaben PET scanning detected Aβ accumulation at 18 m, and (S)-[18F]THK5117 PET revealed subsequent Tau accumulation at 25m in hippocampal and cortical regions. Aβ plaques were low but detectable by immunohistochemistry from 6 m, increasing further at 12 and 18 m with Tau-positive neurons adjacent to Aβ plaques at 18 m. NeuroChrom (a pan neuronal marker) immunohistochemistry revealed a loss of neuronal staining at the Aβ plaques locations, while NeuN labelling revealed an age-dependent decrease in hippocampal neuron number in both genotypes. Behavioural assessment using the novel object recognition task revealed that both WT & TgF344-AD animals discriminated the novel from familiar object at 3 m and 6 m of age. However, low levels of exploration observed in both genotypes at later time-points resulted in neither genotype successfully completing the task. Deficits in social interaction were only observed at 3 m in the TgF344-AD animals. By in vivo MRS, we showed a decrease in neuronal marker N-acetyl-aspartate in the hippocampus at 18 m (-18% vs age-matched WT, and -31% vs 6 m TG) and increased Taurine in the cortex of TG (+35% vs age-matched WT, and +55% vs 6 m TG).

Conclusions: This multi-centre multi-modal study demonstrates, for the first time, alterations in brain metabolites, cholinergic receptors and neuroinflammation in vivo in this model, validated by robust ex vivo approaches. Our data confirm that, unlike mouse models, the TgF344-AD express Tau pathology that can be detected via PET, albeit later than by ex vivo techniques, and is a useful model to assess and longitudinally monitor early neurotransmission dysfunction and neuroinflammation in AD.