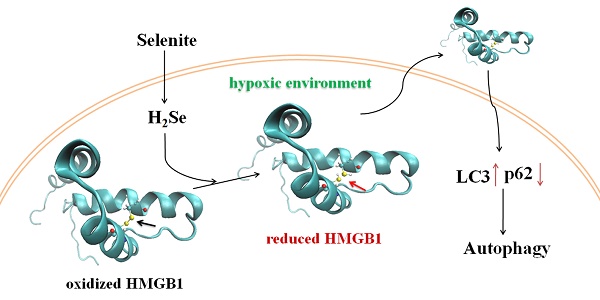 Rationale: Selenium has been shown to have chemotherapeutic effects against cancer. However, the anti-cancer mechanism of selenium is not fully understood, and the role of hydrogen selenide (H2Se), which is a common metabolite of dietary selenium compounds, has not been elucidated due to the lack of detection methods. In this study, we revealed a new anti-cancer mechanism of selenite with the help of a H2Se fluorescent probe.

Methods: HepG2 cells were cultured under a simulated tumor hypoxic microenvironment. The H2Se and H2O2 levels were detected by fluorescent probes in living cells and in mice. Autophagic and apoptotic proteins were detected by Western blotting. The redox of HMGB1 protein were analyzed by non-reducing sodium dodecyl sulfate polyacrylamide gel electrophoresis.

Results: After pharmacological doses of Na2SeO3 treatment of HepG2 cells under hypoxic conditions, high levels of H2Se were produced before cell death. The H2Se accumulation resulted in reductive stress instead of oxidative stress, which was induced by Na2SeO3 treatment under normoxic conditions. Furthermore, H2Se targeted the HMGB1 protein and induced cell autophagy. H2Se could interrupt the disulfide bond in HMGB1 and promote its secretion. The reduced HMGB1 outside the cells stimulated cell autophagy by inhibiting the Akt/mTOR axis. Here, autophagy played a dual role, i.e., mild autophagy inhibited apoptosis, while excessive autophagy led to autophagy-associated cell death.

Conclusions: These results show that H2Se plays a key role during HepG2 cell death induced by selenite. Our findings reveal a new anti-cancer mechanism of selenite and provide a new research area for selenium studies.