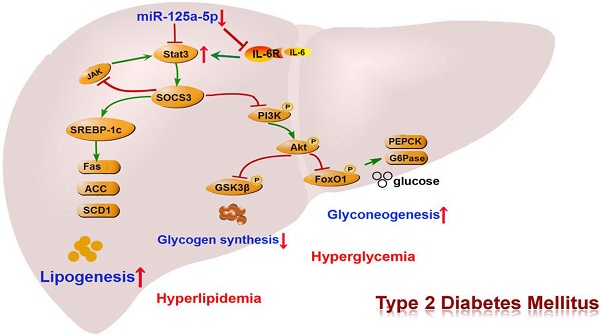 Glycolipid metabolic disorder is an important cause for the development of type 2 diabetes mellitus (T2DM). Clarification of the molecular mechanism of metabolic disorder and exploration of drug targets are crucial for the treatment of T2DM.

Methods: We examined miR-125a-5p levels in palmitic acid-induced AML12 cells and the livers of type 2 diabetic rats and mice, and then validated its target gene. Through gain- and loss-of-function studies, the effects of miR-125a-5p via targeting of STAT3 on regulating glycolipid metabolism were further illustrated in vitro and in vivo.

Conclusions: Our results confirmed that miR-125a-5p should be considered as a regulator of glycolipid metabolism in T2DM, which can inhibit hepatic lipogenesis and gluconeogenesis and elevate glycogen synthesis by targeting STAT3.