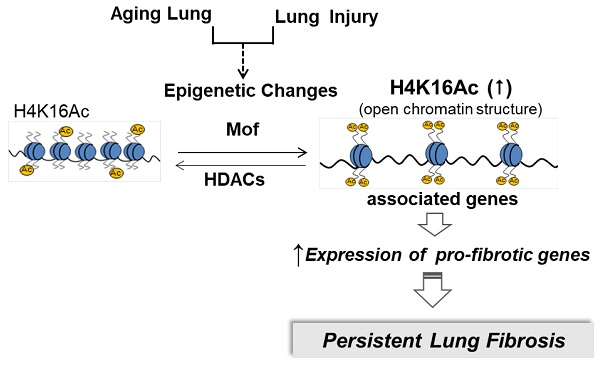 Histone H4 lysine16 acetylation (H4K16Ac) modulates chromatin structure by serving as a switch from a repressive to a transcriptionally active state. This euchromatin mark is associated with active transcription. In this study, we investigated the effects of H4K16Ac on the expression of pro-fibrotic genes in lung fibroblasts from patients with idiopathic pulmonary fibrosis (IPF) and in an aging murine model of lung fibrosis.

Methods: The lung tissues and fibroblasts from human IPF/non-IPF donors and from aged mice with/without bleomycin induced lung fibrosis were used in this study. The H4K16Ac levels were examined by immunohistochemistry or western blots. RNA silencing of H4K16Ac acetyltransferase Mof was used to reduce H4K16Ac levels in IPF fibroblasts. The effects of reduced H4K16Ac on pro-fibrotic gene expression were examined by western blots and real-time PCR. The association of H4K16Ac with these genes' promoter region were evaluated by ChIP assays. The gene expression profile in siRNA Mof transfected IPF cells were determined by RNA-Seq. The impact of H4K16Ac levels on lung fibrosis was evaluated in an aging murine model.

Conclusions: These results indicate a critical epigenetic regulatory role for histone H4K16Ac in the pathogenesis of pulmonary fibrosis, which will aid in the development of novel therapeutic strategies for age-related diseases such as IPF.