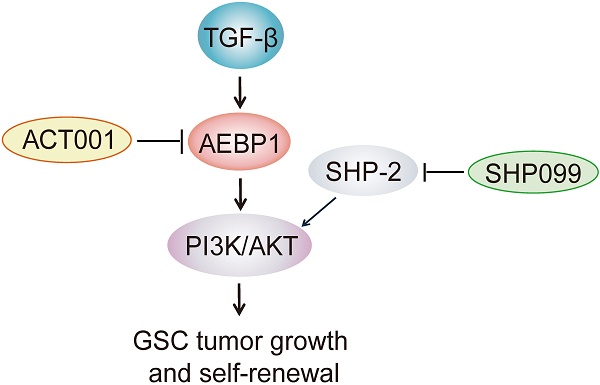 Glioblastoma (GBM) is the most lethal primary brain tumor in adults with a median survival of around 15 months. A potential treatment strategy involves targeting glioma stem-like cells (GSCs) that are able to initiate, maintain, and repopulate the tumor mass. Here, we identify ACT001, a parthenolide derivative, targeting GSCs through regulation of adipocyte enhancer binding protein 1 (AEBP1) signaling.

Methods: The effects of ACT001 on cell survival of normal human astrocytes (NHA) and patient-derived glioma stem-like cells (GSCs) were evaluated. RNA-Seq were performed to detect differentially expressed genes. ACT001 efficacy as a single agent or in combination with SHP-2 inhibitor SHP099 was assessed using a GSC orthotopic xenograft model.

Conclusions: Our data demonstrate AEBP1 as a new druggable target in GBM and ACT001 as a potential therapeutic option for improving the clinical treatment of GBM in combination with SHP099.

ACT001 (also known as dimethylaminomicheliolide, DMAMCL) is developed from parthenolide, a sesquiterpene lactone by Accendatech Co., Ltd (Tianjin, China) [10]. ACT001 showed anti-tumor functions in various cancers, including leukemia [11, 12] and breast cancer [13]. ACT001 has been certified as an orphan drug by both the Food and Drug Administrations in the United States and in the European Union [10, 11]. ACT001 was shown to selectively inhibit acute myelogenous leukemia stem and progenitor cells [11, 12]. More important, ACT001 resulted in good control of GBM growth in China and Australia in Phase I clinical trials [12], and now it is currently undergoing Phase II clinical trials. ACT001 showed synergistic effects with combination of cisplatin by inhibition of PI3K/AKT signaling pathway in GBM [14]. However, the mechanisms by which ACT001 inhibits glioma progression is not clear, which limits the application of this new therapeutic target.

Adipocyte enhancer binding protein 1 (AEBP1) was at first discovered as a transcriptional repressor that binds to the AE-1 element of the ap-2 gene, coding for the fatty acid binding protein (FABP4) [15]. Then, AEBP1 was identified as an oncogenic transcription factor [16-18]. AEBP1 upregulation was observed in prostate cancer [16], which conferred to acquired resistance to BRAF (V600E) inhibition in melanoma. Through upregulation of sonic Hedgehog and NF-kappa B (NF-κB) pathway, AEBP1 functioned as a pro-inflammatory mediator and promoted mammary cell hyperplasia [17]. In gliomas, AEBP1 up-regulated PI3KCB transcription, leading to enhanced AKT phosphorylation and cell proliferation [18].

Here, we investigated whether AEBP1 is a new target of ACT001 in gliomas with activating AKT signaling. We determined the response of AEBP1 knockdown on ACT001 response in GSCs. Treatment with ACT001 either as a single agent or in combination with SHP099 was further performed using an orthotopic xenograft model of GSC.

DNA and packaging plasmids were transduced into HEK293T cells using Lipofectamine 2000 reagent according to manufacturer's instruction (Invitrogen 52758). After 48-h transfection, the viral-containing supernatants were filtered and added into the culture media supplemented with 8 mg/ml polybrene. AEBP1 and AKT short hairpin RNAs (shRNAs) and control shRNAs were purchased from Shanghai GeneChem Company.

Parthenolide derivative (ACT001) was provided by Accendatech Co., Ltd (Tianjin, China) and dissolved in double-distilled (dd)H2O [10]. SHP099 (HY-100388) were purchased from MedChemExpress and dissolved in ddH2O [21].

Cells were seeded in 96-well plates and treated with ACT001, SHP009 or combination for 72 h. Media were replaced with fresh media containing increasing concentrations of ACT001 (ranging from 0 μM to 64 μM) and SHP099 (ranging from 0 μM to 19.2 μM), with each concentration tested in triplicate wells. The concentrations used corresponded to 0.0625, 0.125, 0.25, 0.5, 1, 2, 4 times the IC50 of each agent. The concentration of the single drug that inhibits 50% of cell proliferation (IC50) was determined by fitting the dose-response curve utilizing the CompuSyn software. To calculate the Combination Index (CI), using the method of constant ratio drug combination proposed by Chou and Talalay [23, 24] and described in result. The CI was calculated using the formula: C.I. = CA, X/ICX, A+CB, X/ICX, B, where CA, X and CB, X are the concentration of ACT001 and SHP009 used in combination to achieve 50% drug effect. ICX, A and ICX, B are the concentrations for single agents to achieve the same effect. A CI of less then, equal to, or more than 1 indicates synergic, additive or antagonistic effect, respectively.

After ACT001 treatment, culture supernatant and trypsinized cells were combined and centrifuged. After two washes in cold PBS, cells were fixed with 70% ethanol overnight at 4ºC and resuspended in 0.5 ml staining solution supplemented with 10 μl propidium iodine (PI) and 10 μl RNase A (YEASON). After incubation for 30 min at 37ºC in the dark, analysis was performed on a FACS ACCuri C6 (BD Biosciences).

Total RNA was extracted with TRIzol reagent (Invitrogen). RNA-Seq was performed as previously described [25] and the data had been deposited with the Gene Expression Omnibus under accession ID GSE157779. A Maxima First Strand cDNA Synthesis Kit (Thermo Fisher Scientific) was used and qRT-PCR was performed with Maxima SYBR Green qPCR Master Mix (Applied Biosystems) on a QuantStudio 6 Flex Real-Time PCR System (Applied Biosystems). The primers were listed: GAPDH, 5'-CATCACTGCC ACCCAGAAGACTG-3' and 5'-ATGCCAGTGAGCTTCCCGTTCAG-3'; AEBP1, 5'-GAGGAGTTGGAGGAGGAGTGGAC-3' and 5'-AGGAGGCTCGGATCTGGTTGTC-3'. GAPDH was used as the internal control.

All animal experiments were conducted in accordance with the animal use guidelines by the Shanghai Jiao Tong University Institutional Animal Care and Use Committee. Athymic nu/nu female mice aged 6 weeks (SLAC, Shanghai, P.R.C) were used. In total 2,000 GSCs were stereotactically implanted into the brain of the animals as previously described [20]. A scheme of treatment was described in the corresponding figure legend. Mice were euthanized when neuropathological symptoms developed.

ACT001 is an orally available chemotherapeutic agent with IC50 of 27 μM and 21 μM against C6 and U87 glioma cells, respectively [10]. To assess the effects of ACT001 on glioma stem-like cells (GSCs), we performed cell viability analysis and found that compared to normal human astrocytes (NHA), patient-derived GSC 1123 and R39 cells were more responsive to ACT001 (Figure 1A and 1B). ACT001 markedly inhibited glioma sphere formation in GSC 1123 and R39 cells (Figure 1C). We also performed flow cytometric analyses of cell cycle and found that compared the vehicle, ACT001 did not impair the cell cycle in NHA, GSC 1123, or R39 cells (Supplementary Figure 1). This data indicate that ACT001 is more selective for GSCs than NHA.

ACT001 inhibits the expression of AEBP1, a prognostic factor of gliomas

To investigate the underlying mechanism by which GSCs are more responsive to ACT001 treatment, we employed RNA-Seq analysis in GSC 1123 cells treated with or without ACT001. Gene expression profile analysis identified 858 genes whose expression was significantly reduced by ACT001 treatment and 1075 genes whose expression was markedly increased by ACT001 treatment (false discovery rate < 0.05 and a folder change > 2) (Figure 2A). AEBP1 is a top one in ACT001 down-regulated genes (Figure 2A). Given that AEBP1 is important for various cancers [16, 17], including glioma [18], we further investigated if it is a target of ACT001 in GSCs. As shown in Figure 2B, the expression level of AEBP1 was significantly decreased by both 5 and 10 μM ACT001 treatment. This result was further validated by qRT-PCR (Figure 2C) and Western blotting (WB) analyses (Figure 2D) in GSC 1123 and R39 cells. This data suggests that AEBP1 is a putative target of ACT001 in GSCs.

Next, we determined the relationship of AEBP1 expression and glioma patient survival using the RAMBRANDT and the Cancer Genome Atlas (TCGA) datasets. As shown in Figure 2F, Kaplan-Meier survival analysis revealed a statistically significant worse prognosis for glioma patients with high AEBP1 (> median level) compared to those with low levels of AEBP1 (< median level) in the RAMBRANDT dataset. The median patient survival times of these patients were 12.8 and 37.4 months, respectively. Kaplan-Meier survival analysis of the TCGA low-grade glioma (TCGA-LGG) and TCGA GBM RNA-Seq datasets further indicated that AEBP1 is a prognostic factor for glioma patients (Figures 2G and 2H). These data demonstrate that ACT001 may inhibit glioma progression through targeting AEBP1, a prognostic factor for gliomas. 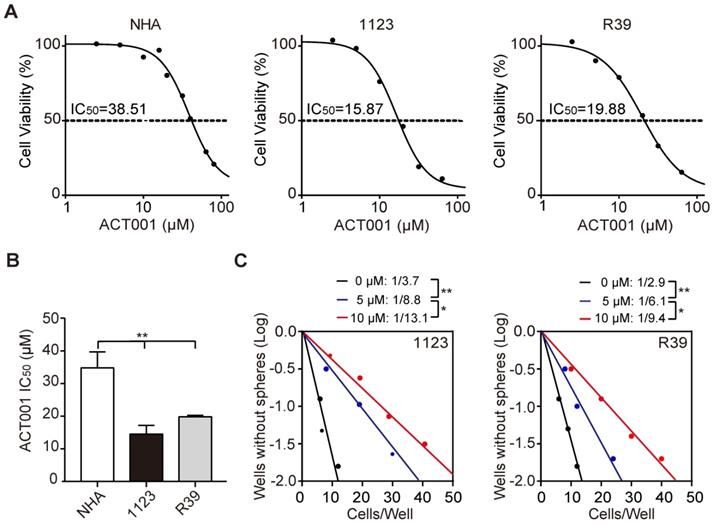 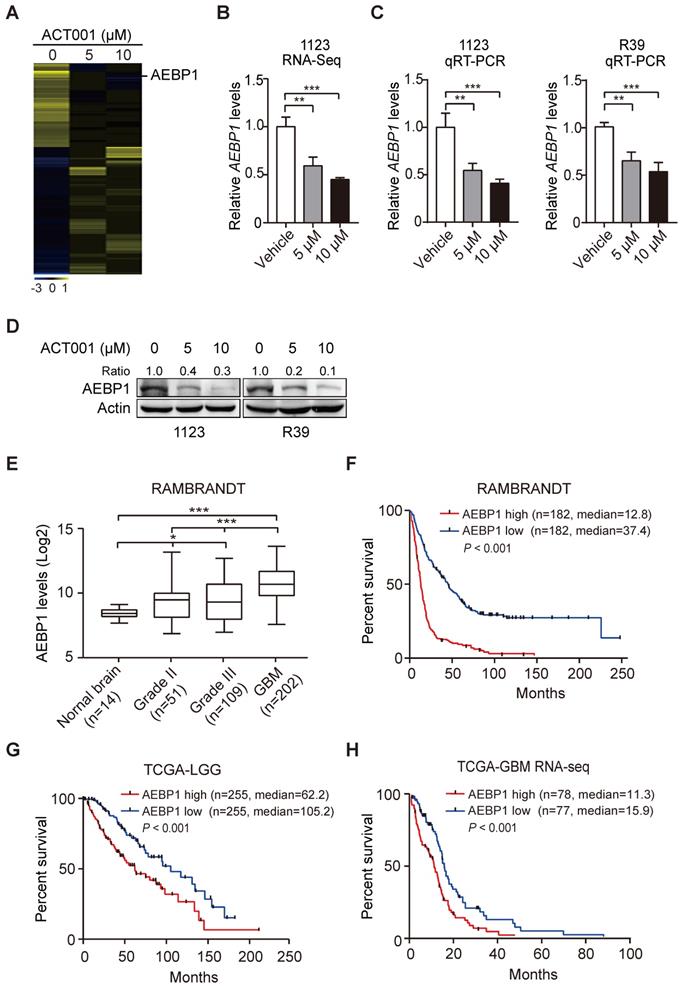 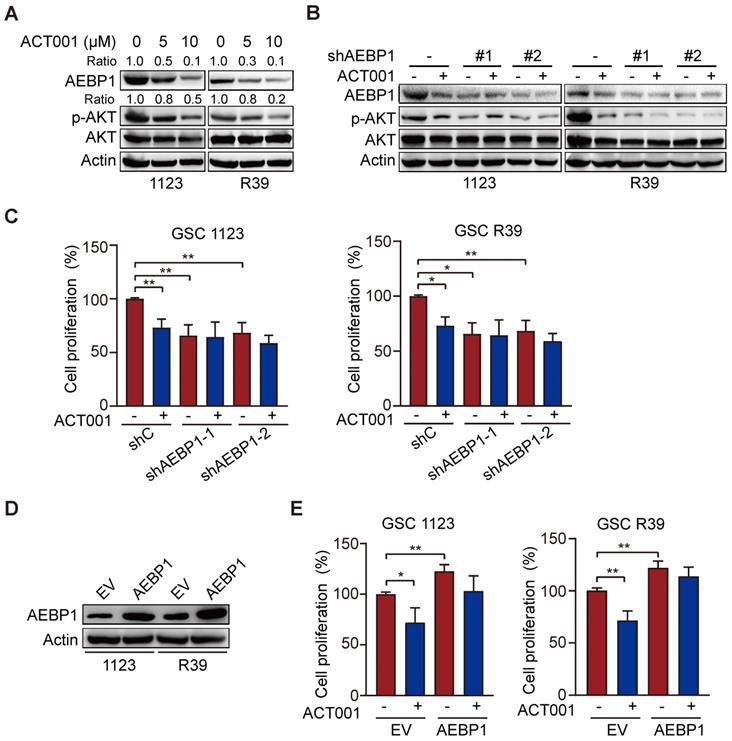 There are three AKT/PKB isoforms, AKT1 (PKBα), AKT2 (PKBβ), and AKT3 (PKBγ) in mammalian genomes [27]. To assess which AKT isoform is promoted by AEBP1 in GSCs, we separately transfected the shRNAs of AKT1, AKT2, or AKT3 into GSC 1123/shAEBP1 cells. As shown in Figure 4C, compared to the control, KD of AKT1, AKT2, or AKT3 decreased cell proliferation. However, compared to AKT1 KD, depletion of AKT2 or AKT3 significantly decreased cell proliferation in GSC 1123/shAEBP1 cells. This result indicates that AEBP1 KD partially decreases AKT1, but not AKT2/3 activity and thereby AKT1 KD weakly inhibits cell proliferation compared to AKT2/3 KD in AEBP1 KD cells. 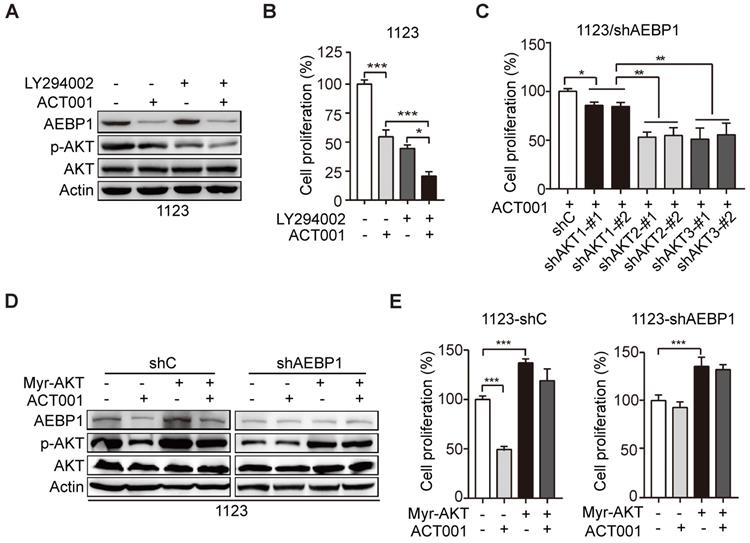 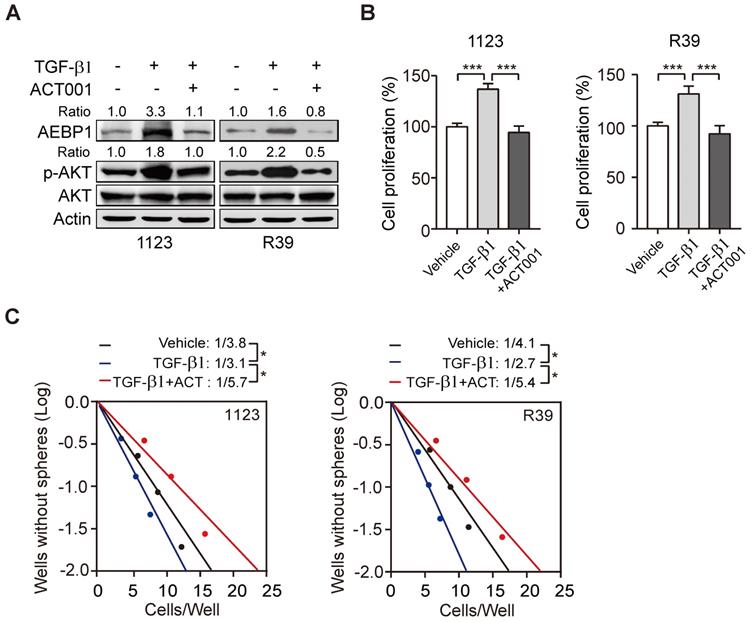 SHP099 is a highly potent and orally available inhibitor of SHP-2 and inhibits multiple cancer progression [33-35]. Our recent study demonstrated that SHP099 exhibits antitumor activity either as a single agent or in combination with TMZ and provides significant survival benefits for GBM tumor xenograft-bearing animals [20]. We first test if the superior effect of ACT001 plus SHP099 by the synergistic effect of the two compounds addition. We used the Chou-Talalay method for drug combination studies[23] and determined the dose-response curves of ACT001 and SHP099 individually and in combination at a constant potency ratio. For each of the GSC cell lines, we observed the single-agent activity of ACT001 and SHP099 and a remarkably potent synergistic inhibition of cell viability after combined treatment. The calculated combination index (CI) values for GSC 1123 and R39 cells at doses effective in reducing cell viability by 90% were 0.48, 0.21, respectively (Figure 6A). The CI value of ACT001 in combination with SHP099 was less than 1 (< 1), indicating that ACT001 has a synergistic effect with SHP099. We further assessed the activities of AEBP1/AKT axis in response to ACT001 and SHP099 alone or in combination in GSC 1123 and R39 cells. As shown in Figures 6B and 6C, compared to the vehicle control, SHP099 decreased p-AKT and cell proliferation but not AEBP1 expression. Combined treatment with ACT001 and SHP099 significantly decreased p-AKT and cell proliferation compared to single ACT001 or SHP099 treatment (Figure 6A-6C), suggesting that ACT001 in combination with SHP099 decreases GSC proliferation in vitro.

Next, to examine the in vivo antitumor effect of single ACT001 treatment or in combination with SHP099, we employed an orthotopic xenograft model in immunodeficient mice. Oral gavage of ACT001 (100 mg/kg) with or without intraperitoneal injection of SHP099 (25 mg/kg) was initiated after randomization at Day 3 after GSC 1123 implantation (Figure 7A). Compared to the vehicle control, ACT001 treatment markedly decreased tumor growth (Figures 7B-7E) and extended the survival GBM-bearing animals (Figure 7F). Additionally, IHC analysis showed that ACT001 significantly reduced p-AKT and the expression of AEBP1, cell proliferation marker Ki-67, and GSC marker hNestin (human Nestin) in GSC 1123 xenograft tumors (Figure 7G). ACT001 in combination with SHP099 further reduced tumor burden (Figures 7B-7E), p-AKT, the expression of AEBP1, Ki-67, hNestin (Figure 7G), and extended survival to a greater extent than ACT001 treatment alone (Figure 7F), suggesting that the combination of ACT001 and SHP099 synergizes to extend the survival in our GSC xenograft model (Figure 7H). 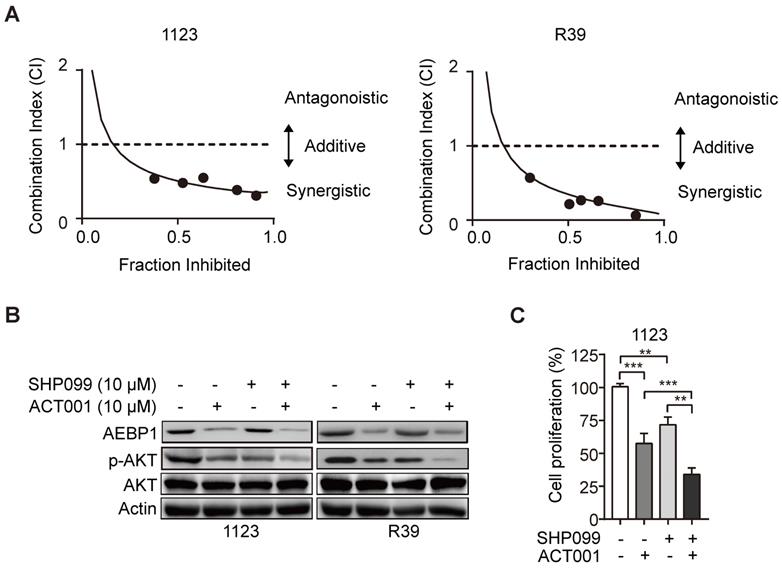 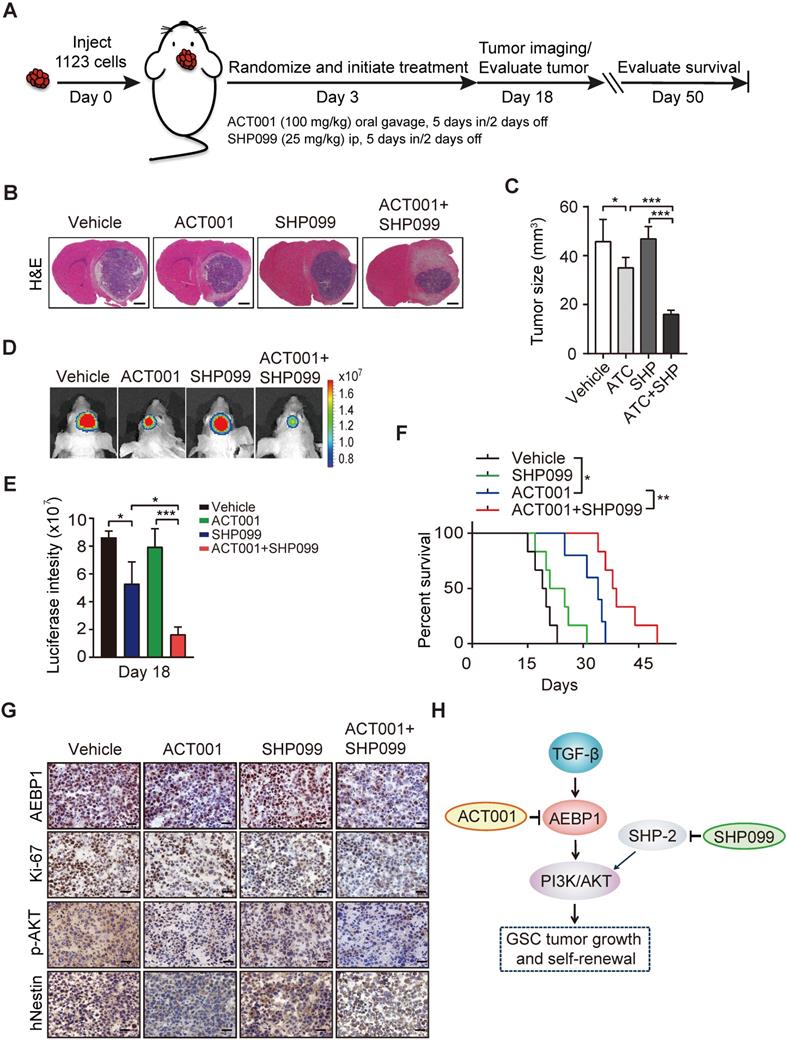 Despite ACT001 had exhibited good potential for GBM treatment in clinical trials [12], the mechanism by which ACT001 inhibits tumor growth is still unclear. In this study, we conducted an extensive preclinical in vitro and in vivo analysis of ACT001 inhibition of multiple GSC cells and one GSC xenograft model. GSCs were more responsive to ACT001 compared with NHA in vitro. ACT001 inhibited GSC proliferation and glioma sphere formation through targeting AEBP1/PI3K/AKT signaling and prolonged the survival of animals as a single agent or in combination with SHP099 in an orthotopic GSC xenograft.

Taken together, this study identifies AEBP1 as a new target of ACT001 and a putative prognostic factor in glioma. The newly elucidated roles of AEBP1 in GSC proliferation and glioma sphere formation provide a strong rationale for targeting this molecule in clinical treatment of human gliomas. ACT001 as a single agent or in combination with SHP-2 inhibitor SHP099 provides significant survival benefits to GBM tumor xenograft-bearing animals, which also provide a strong rationale for validation of combination of ACT001 and SHP099 as a therapeutic approach against GBM.