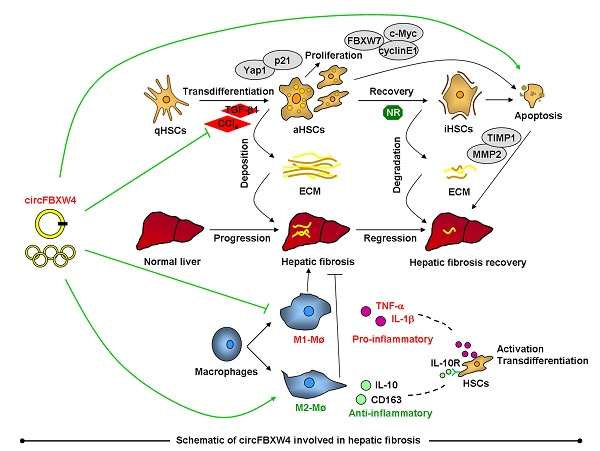 Rationale: Circular RNAs (circRNAs) are a new form of noncoding RNAs that play crucial roles in various pathological processes. However, the expression profile and function of circRNAs in hepatic fibrosis (HF) remain largely unknown. In this study, we show a novel circFBXW4 mediates HF via targeting the miR-18b-3p/FBXW7 axis.

Methods: We investigated the expression profile of circRNAs, microRNAs and mRNAs in hepatic stellate cells (HSCs) from HF progression and regression mice by circRNAs-seq and microarray analysis. We found a significantly dysregulated circFBXW4 in HF. Loss-of-function and gain-of-function analysis of circFBXW4 were performed to assess the role of circFBXW4 in HF. Furthermore, we confirmed that circFBXW4 directly binds to miR-18b-3p by luciferase reporter assay, RNA pull down and fluorescence in situ hybridization analysis.

Conclusions: circFBXW4 may act as a suppressor of HSCs activation and HF through the circFBXW4/miR-18b-3p/FBXW7 axis. Our findings identify that circFBXW4 serves as a potential biomarker for HF therapy.