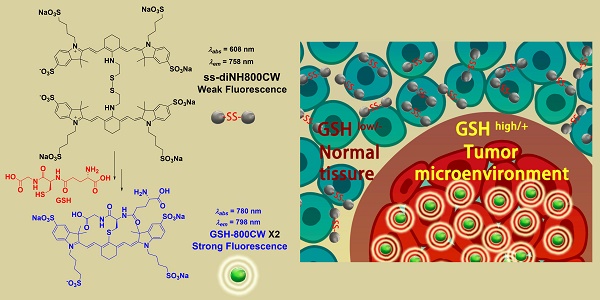 Near-infrared (NIR) fluorescence imaging has been proved as an effective modality in identifying the tumor border and distinguishing the tumor cells from healthy tissue during the oncological surgery. Developing NIR fluorescent probes with high tumor to background (T/B) signal is essential for the complete debulking of the tumor, which will prolong the survival rate of tumor patients. However, the nonspecific binding and “always-on” properties of the conventional fluorescent probes leads to high background signals and poor specificity.

Method: To address this problem, glutathione (GSH)-responsive, two disulfide-bonded dicyanine dyes (ss-diCy5 and ss-diNH800CW) were synthesized. As synthesized dyes are quenched under normal physiological conditions, however, once reached to the tumor site, these dyes are capable of emitting strong fluorescence signals primarily because of the cleavage of the disulfide bond in the tumor microenvironment with high GSH concentration. Besides, the GSH-responsive behavior of these dyes was monitored using the UV-vis and fluorescence spectroscopy. The diagnostic accuracy of the aforementioned dyes was also tested both in tumor cells and 4T1-bearing mice.

Fluorescence imaging is an essential means of pathological monitoring and diagnosis at the molecular level [1-9], and the choice of the appropriate fluorescent probe is a key point for this technique [10-19]. Conventional fluorescent probes produce fluorescence signals in both cancerous and healthy tissues, which lead to relatively high background signals and poor specificity [20]. To address this problem, activatable fluorescent probes have been designed, which is quenched or inactive under normal conditions and showed no or very little fluorescence. However, once reached to the desired tumor site, these activatable probes can emit strong fluorescence signals mainly due to the acidic tumor microenvironment or specific enzyme activity, which improves the T/B ratio and tumor specificity [21].

Cyanine dyes have been broadly explored as always-on probes for fluorescence imaging not only in preclinical but in clinical settings as well, such as CW800 [22], ZW800-1 [23], Cy5 cDots [24]. However, because cyanine dyes are constituted of large conjugate aromatic rings and alkenes, π-π stacking and aggregation are usually prevalent in aqueous solution [25-27]. The aggregation nature of these cyanine dyes often causes serious fluorescent quenching problem, thus lowering the signal to noise ratio (SNR) for optical imaging.

Nevertheless, the conjugate [28-33] or non-conjugate [34-37] dicyanine dyes suffer more severe aggregation-caused quenching (ACQ) than the mono cyanine because of the higher short-range molecular interactions such as π-π stacking. However, on the other hand, dicyanines hold the ability to provide extremely low background for fluorescence imaging; and if the fluorescence can be recovered at the tumor site, real-time tumor imaging with high resolution can be easily achieved.

Therefore, attempts to improve the SNR via background signal reduction have primarily focused on designing NIR fluorophores whose signals can be modified in response to the local tumor microenvironment (TME) [38-43]. For instance, the difference in the intracellular and extracellular concentration of glutathione (GSH) (approximately 2-10 mM in intracellular vs 2-20 μM in extracellular) can be realized as an ideal stimulus to improve the SNR of fluorescence dyes. Therefore, the concentration contrasts are broadly harnessed to trigger the cleavage of fluorophores conjugated with a disulfide bond [44-55]. This GSH-responsive cleavage enriched the manner of fluorescence signals and offered an efficient approach to enhance the SNR of bioimaging.

The solution of dihydrazine compounds (3 g) in AcOH (20 mL) was added 3-methylbutanone (5.15 g) and heated to reflux for 12 hours. Then AcOH was removed and afforded the crude diindole intermediate, which was directly used for the next step.

Diindole quaternary ammonium salt (15 mg) and malondialdehyde dianil hydrochloride (9.3 mg) was refluxed in a solution of AcOH/Ac2O (1 mL, 1:1 ratio) for 2 hours. Then the hemicyanine intermediate precipitated by addition of Et2O and dried under vacuum. The intermediate was re-dissolved in AcOH (0.5 mL), adding 4-sulfobutyl quaternary ammonium indole (15.6 mg) and pyridine (0.5 mL). The solution was heated to 80 oC for 2 hours. The product was precipitated with Et2O as blue solid, and washed 3 times with Et2O. The blue precipitate was purified on a reversed-phase C18 column using 5% to 35% gradient of MeOH in H2O to afford ss-diCy5 (63%).

4T1 murine breast cancer cells were cultured in DMEM medium (Gibco, USA) supplemented with 10% fetal bovine serum (BI, USA) and 1% penicillin/streptomycin. The cellular uptake and intracellular localization of ss-diCy5, c-diCy5 and mono-Cy5 were observed by a fluorescence microscopy. 4T1 cells were seeded on 24-well plate at a density of 5x104 per well and incubated overnight. Then the pre-seeded cells were exposed to ss-diCy5 (5 μM), mono-Cy5 (10 μM) or c-diCy5 (5 μM) for 4 h. After washing with PBS for 3 times, the intracellular fluorescence of Cy5 was imaged with a fluorescence microscope (Leica DMI3000B, Wetzlar, Germany; ×400 magnification).

In Vitro Cytotoxicity and In Vivo Biocompatibility Studies

Cytotoxicity of the various ss-didyes was evaluated in 4T1 cells. 4T1 cells were pre-seeded in 96-well at a density of 5,000 per well and cultured for 4 h, followed by incubation with various concentrations of mono-Cy5, ss-diCy5, c-diCy5, ss-diNH800CW and mono-NH800CW. 24 h later, methyl thiazolyl tetrazolium (MTT) assay was used to evaluate the cell viability.

For biocompatibility studies, the mice were randomly divided into 6 groups (n = 3 per group). The 6 groups of mice were intravenously injected with ss-diCy5, c-diCy5, ss-diNH800CW at a dose of 0.5 µmol kg-1, mono-Cy5, mono-NH800CW at a dose of 1 µmol kg-1, or PBS. After various injection, the body weights were recorded every day for 14 days. Then mice were sacrificed and main organs (heart, liver, spleen, lung and kidney) were excised for H&E staining to evaluate the biocompatibility of various ss-didyes. The H&E images were obtained with a microscope (Leica DMI3000B, Wetzlar, Germany).

As synthesized three Cy5 dyes, mono-Cy5 (10 μM), ss-diCy5 (5 μM), and c-diCy5 (5 μM) were dissolved in methanol and PBS, respectively and their ultraviolet-visible (UV-vis) absorption spectrum and fluorescence spectrum were observed as shown in Figure 1.

Figure 1A indicates that in methanol, the absorbance peaks of all three Cy5 dyes were similar at around 650 nm with similar intensity. A clear shoulder peak appeared at 590 nm in the UV-vis absorption spectra of c-diCy5, indicating the aggregation phenomenon in the solution. Fluorescence spectrum of c-diCy5 further validated the presence of aggregation in the solution as the fluorescence intensity of c-diCy5 is only ~ 9.6% of that of mono-Cy5. However, the fluorescence intensity of ss-diCy5 was almost equivalent to that of mono-Cy5, denoting minimal aggregation in the ss-diCy5 methanol solution (Figure 1B). Since methanol is an excellent solvent for all three Cy5 dyes, intermolecular aggregation is negligible in the methanol solutions. These observations highlighted that the intramolecular interaction in the c-diCy5 is mainly responsible for the aggregation phenomenon.

In the UV-vis absorption spectrum measured in PBS (Figure 1C), a clear shoulder peak at around 590 nm appeared with a much higher intensity than the 650 nm peak in the ss-diCy5 solution, while the spectra of c-diCy5 in PBS is similar with that in methanol. Moreover, the peak at 650 nm of both of the dicyanine Cy5 dyes is much lower that of mono-Cy5, indicating the aggregation of both dicyanine dyes in PBS solution. This is largely due to the presence of intermolecular aggregation of the ss-diCy5 and both intermolecular and intramolecular aggregation of c-diCy5 in PBS, which leads to the fluorescence intensity quenching by 55.0% for ss-diCy5 and 92.8% for c-diCy5 compared to the intensity of mono-Cy5 (Figure 1D).

Thus, the self-aggregation of dicyanine dyes is more severe in PBS. This is primarily due to the fact that the two cyanines are one carbon atom apart in the c-diCy5 molecule and a total of ten atoms apart in the ss-diCy5 molecule, thereby, a conclusion can be drawn that the closer the two cyanines in the dicyanine molecule are, the stronger the aggregation in the PBS solution will be, and the more fluorescence quenching will be observed. 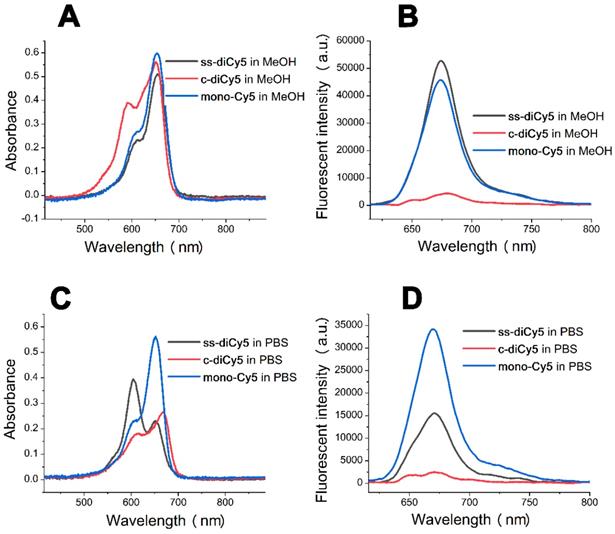 Fluorescence recovering of ss-didyes upon the addition of GSH

To collect more evidence, the ss-diCy5 GSH solution was subjected to MALDI-TOF MS analysis. After interaction of GSH (1.5 μM) with ss-diCy5 (5 mM) for 30 minutes, peaks of 1116.68 (corresponding to [s-Cy5 + GSH + H]+) and 810.67 (corresponding to [s-Cy5+ H]+) were observed simultaneously in the MALDI-TOF MS spectra (MS, Figure S13; Supplementary Information), demonstrating the cleavage of disulfide linker and formation of new mono Cy5 dyes with strong fluorescence intensity.

Next, the spectral properties of ss-diNH800CW upon reaction with GSH were studied. After treatment with GSH, the absorption band of 608 nm gradually decreased in the ss-diNH800CW solution as a new band appeared and enhanced at 780 nm instead of 630 nm (Figure 4A), and the fluorescence signal strength at 798 nm enhanced by 27-fold (Figure 4B). After addition of the GSH for 120 minutes, the band of 608 nm almost disappeared, and the band of 780 nm reached maximum intensity. It was assumed that the ss-diNH800CW first reacted with GSH to form the disulfide intermediates GSH-s-NH800CW, then GSH-s-NH800CW quickly continued reacting with the excess of GSH to generate the thiol nucleophilic substitution product GSH-NH800CW. (MS, Figure S14; Supplementary Information) The mass spectroscopy result of the ss-diNH800CW GSH solution proved that the dicyanine dye ss-diNH800CW was completely converted into GSH-NH800CW (peak of 1186.87, corresponding to [GSH-NH800cw + Na]+) (MS, Figure S13; Supplementary Information). 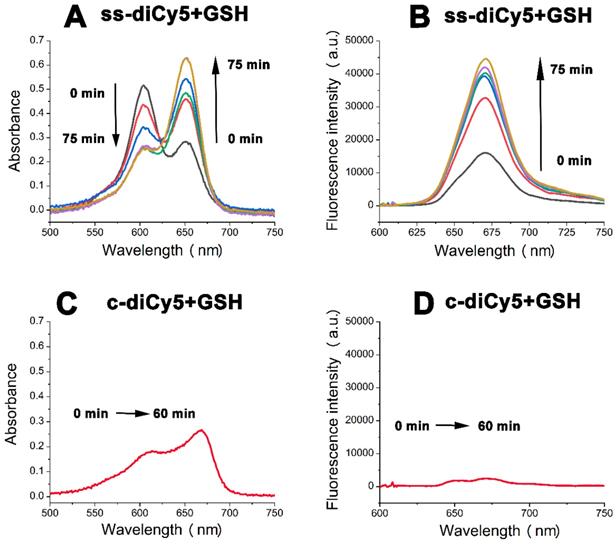 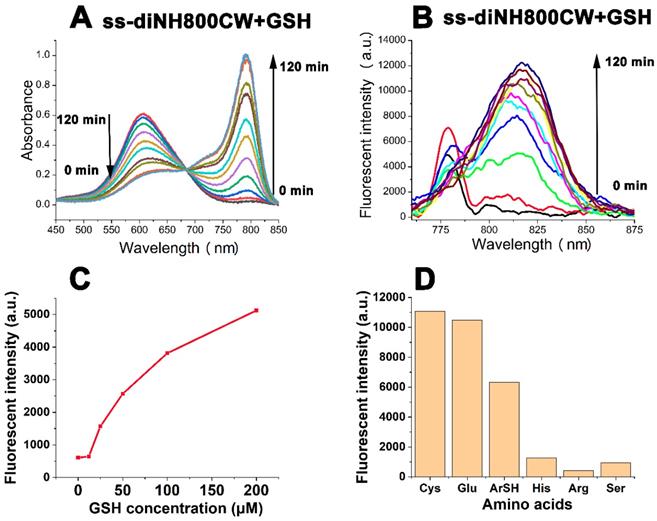 As a next step, the resulted disulfide dicyanines were evaluated for the enhanced release of mono-dye in the presence of GSH in vitro. The cellular uptake and intracellular localization of ss-diCy5, c-diCy5, and mono-Cy5 were examined by fluorescence microscopy. The fluorescence from ss-diCy5 and mono-Cy5 (red) was observed in the cytoplasm, suggesting that the ss-diCy5 was effectively taken up by cancerous cells and transformed into mono dye in the presence of intracellular GSH. (Figure 5) In contrast, the failure to observe the fluorescence of c-diCy5 in vitro indicated the high stability of methylene linkage in the c-diCy5 molecule. Therefore, the activatable dye ss-diCy5 with fluorescence switch can be used as an ideal probe for the fluorescence imaging of cancer cells.

Cellular uptake of ss-diCy5, c-diCy5 and mono-Cy5. Scale bar = 5 μm. 4T1 cells were seeded at the density of 5x104 per well on 24-well plate and cultured overnight. Then the pre-seeded cells were incubated with ss-diCy5, mono-Cy5 or c-diCy5 at a Cy5 equivalent concentration of 10 μM. After that, the cells were incubated for 4 h. Finally, the intracellular fluorescence of Cy5 was tested with a fluorescence microscope (Leica DMI3000B, Wetzlar, Germany; ×400 magnification). 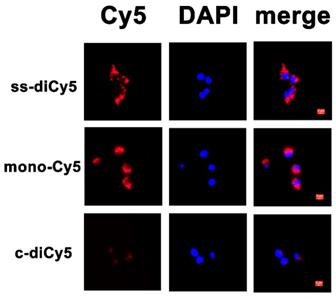 The in vitro cytotoxicity of ss-didyes was evaluated by MTT assay. 4T1 cells were treated with different concentrations of ss-diCy5, c-diCy5, mono-Cy5 and ss-diNH800CW, ss-monoNH800CW. As shown in Figure 6, the increase in the concentration of ss-didyes only led to a slight decrease in cell viability, indicating the excellent biocompatibility of ss-diCy5 and ss-diNH800CW in vitro.

However, the fluorescence imaging results of intravenous injection of the disulfide dicyanine dyes were quite disappointing. The dicyanine dyes were cleared very quickly through kidneys. Even 24 h after the intravenous injection, the fluorescence intensity in the liver and spleen were much higher than that accumulated into the tumor, suggesting either the targeted modification of the disulfide dicyanine dyes or assembly into nanoparticles are necessary for the optical imaging of the tumor tissue.

Cell viability of 4T1 cells treated by various concentration of (A) mono-Cy5, ss-diCy5, c-diCy5 and (B) ss-diNH800CW, mono-NH800CW. 4T1 cells were pre-seeded in 96-well at a density of 5,000 per well and cultured for 4 h, followed by incubation with various concentrations of mono-Cy5, ss-diCy5, c-diCy5, ss-diNH800CW and mono-NH800CW. 24 h later, MTT assay was used to evaluate the cell viability. 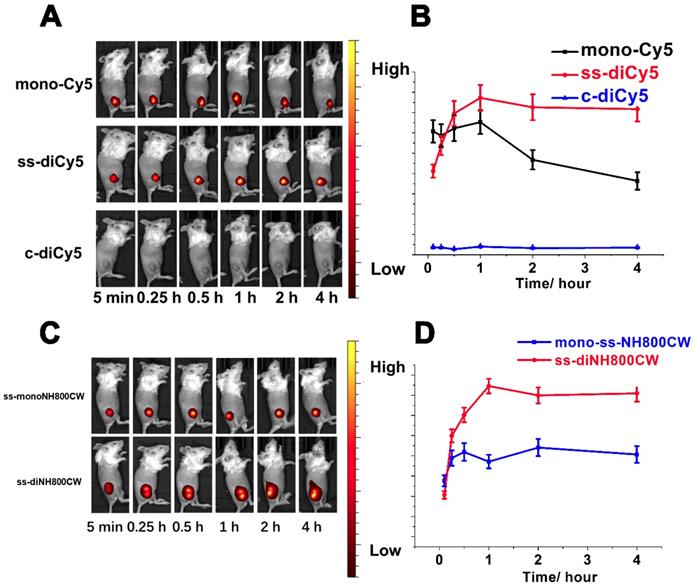 (A) Body weight of different groups of mice after intravenously injected with ss-diCy5, c-diCy5, ss-diNH800CW at a dose of 0.5 μmol kg-1, mono-Cy5, mono-NH800CW at a dose of 1 μmol kg-1, or PBS. (B) H&E staining microscopy images of heart, liver, spleen, lung, kidney of mice which intravenously injected with ss-diNH800CW and mono-NH800CW. Scale bar = 50 μm.