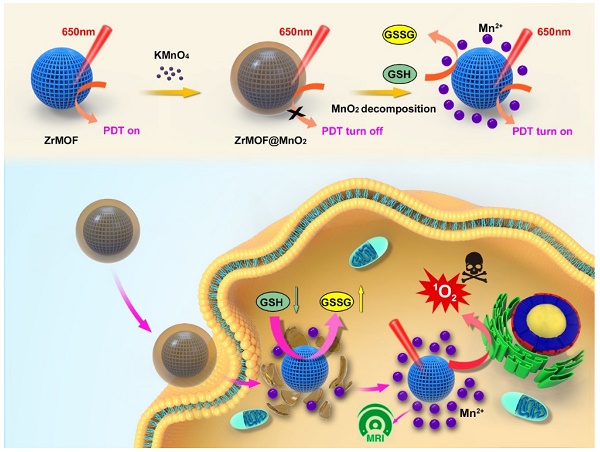 The design of hybrid metal-organic framework (MOF) nanomaterials by integrating inorganic nanoparticle into MOF (NP@MOF) has demonstrated outstanding potential for obtaining enhanced, collective, and extended novel physiochemical properties. However, the reverse structure of MOF-integrated inorganic nanoparticle (MOF@NP) with multifunction has rarely been reported.

Results: A core-satellites structure with fluorescence off and on function was obtained when growing MnO2 on the surface of fluorescent zeolitic imidazolate framework (ZIF-8) nanoparticles. Furthermore, A core-shell structure with photodynamic activity off and on function was achieved by growing MnO2 on the surface of porphyrinic ZrMOF nanoparticles (ZrMOF@MnO2). Both the fluorescence and photodynamic activities can be turned off by MnO2 and turned on by GSH. The GSH-responsive activation of photodynamic activity of ZrMOF@MnO2 significantly depleted the intracellular GSH via a MnO2 reduction reaction, thus triggering an enhanced photodynamic therapy efficacy. Finally, the GSH-reduced Mn2+ provided a platform for magnetic resonance imaging-guided tumor therapy.

Photodynamic therapy, which takes advantage of photons to generate therapeutic reactive oxygen species, has emerged as an alternative to traditional surgery, chemotherapy, and radiotherapy to combat cancer [1, 2]. As a non-invasive treatment, photodynamic therapy causes fewer harmful side-effects than the conventional treatments [3]. Nanotechnology has demonstrated potential biomedical applications by combining nanomaterials and photosensitizers for collective delivery, imaging, and photodynamic therapy [4-6]. With functional nanomaterials, multi-purpose platforms, including synergistic and cascaded cancer therapy, have been achieved [7, 8].

Metal-organic framework (MOF), an emerging type of crystalline material formed by coordinating metal ions and organic linkers, has attracted significant attention because of their porous structures and unique properties at the nanometer scale [9-11]. In particular, MOF nanoparticles have shown great potential in biomedical applications owing to their uniform and well-defined structures [12-14]. Porous structure made MOF an ideal candidate as a delivery platform for disease treatment [15-18]. The preparation of nanoscale porphyrinic MOF nanoparticles solved many issues associated with porphyrinic photosensitizers, such as aggregation, self-quenching, and uncontrollable in vivo administration for cancer therapy [3, 19]. However, intracellular glutathione (GSH) is fatal to the reactive oxygen species generated from photosensitizers, especially in tumor cells which have much higher concentration of GSH than normal cells [20-23]. So, it would be ideal to develop photosensitizer-based MOF with GSH depletion function.

Recently, the design of multifunctional MOF nanomaterials by integrating inorganic nanoparticle into MOF (NP@MOF) has opened new paths to obtain enhanced, collective, and extended novel physicochemical properties [24-27]. For example, efficient and selective hydrogenation has been achieved by incorporating Pt nanoparticles into MIL-101 (Fe) nanoparticles (Pt@MIL-101) [28] and heterodimer made of upconversion nanoparticles and MOF was demonstrated to be a promising platform for NIR-induced photodynamic therapy for efficient cancer treatment [27]. Core-shell gold nanorod@MOFs provided a combined photodynamic and photothermal therapy platform [4]. However, the reverse structure of MOF-integrated inorganic nanoparticle (MOF@NP) with multifunction has not been reported yet.

Inspired by the novel properties generated from these NP@MOF hybrids, we developed a facile in-situ growth method to integrate MOF into inorganic nanomaterials. In this method, MOF nanoparticles were used as seed to grow inorganic nanomaterial for potential biochemical applications. MnO2 nanosheets have been studied as a novel fluorescence sensing platform for biochemical detection [29-31]. The intrinsic adsorption of dyes and single stranded DNA on MnO2 nanosheets induces a significant fluorescence quenching through fluorescence resonance energy transfer (FRET), allowing fluorescence-based target quantification [32-35]. Many studies have proved that Mn ions have cytotoxicity on various cancer cell lines. The exploration of Mn-based photodynamic therapy represents an intriguing avenue to the cancer treatment. Thus, we select MnO2 as the inorganic nanomaterial shell to explore the optical property of MOF nanoparticles. We first prepared fluorescent ZIF-8 and hypothesized the MnO2 could quench the fluorescence of ZIF-8 after growing on the surface of ZIF-8. Moreover, ZrMOF nanoparticles were synthesized by growing a layer of MnO2. In this case, we hypothesized that MnO2 could suppress the photodynamic activity of ZrMOF and a recovery of photodynamic activity can be obtained by decomposing the surface layer of MnO2 (Figure 1). 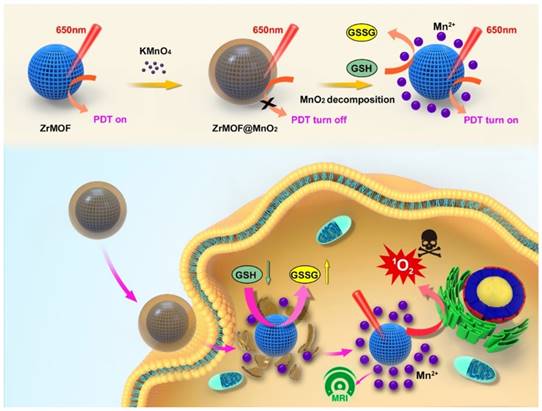 To test our first hypothesis, FITC encapsulated ZIF-8 (ZIF-FITC) [36] was prepared as shown in figure 2A and figure S9. Aqueous KMnO4 solution was then introduced to the aqueous ZIF-8 nanoparticle solution with vigorous stirring. A structure with ZIF-FITC nanoparticle core and MnO2 nanodot satellites (Figure 2B) was formed quickly upon observing a color change from dark red to brown (Figure 2C). Fluorescence spectroscopy indicated that the fluorescence of the encapsulated FITC was quenched after forming this ZIF-FITC@MnO2 hybrid. However, the fluorescence of FITC in the ZIF-8 nanoparticle was recovered (Figure 2D) after introducing GSH to reduce MnO2 to Mn ions. 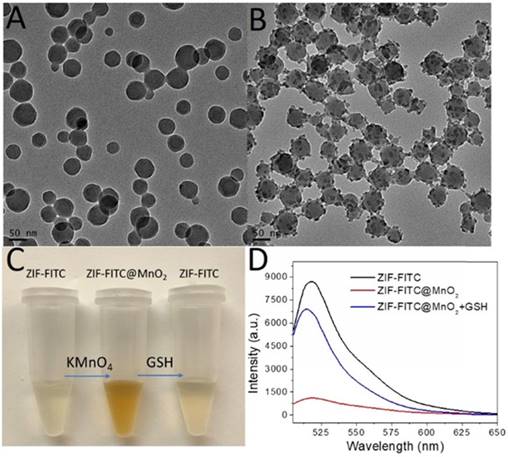 Upon verifying the fluorescence turn-off by MnO2 and turn-on by GSH, we further designed a ZrMOF@MnO2 hybrid using a similar method as the preparation of ZIF-FITC@MnO2 to control the photodynamic activity of porphyrinic MOF. The assembly of porphyrinic photosensitizers to MOF nanoparticles provides many advantages over free photosensitizers in photodynamic therapy. Porphyrinic MOF nanoparticles can accumulate in tumor by the enhanced permeability and retention effect and can then generate cytotoxic singlet oxygen to destroy the tumor. However, as mentioned above, the intracellular GSH can quench the generated singlet oxygen generated by porphyrinic MOF. This is especially problematic in tumor cells, where the intracellular GSH level is much higher than in normal cells. Therefore, depletion of GSH is a promising way to enhance the photodynamic therapy efficiency. 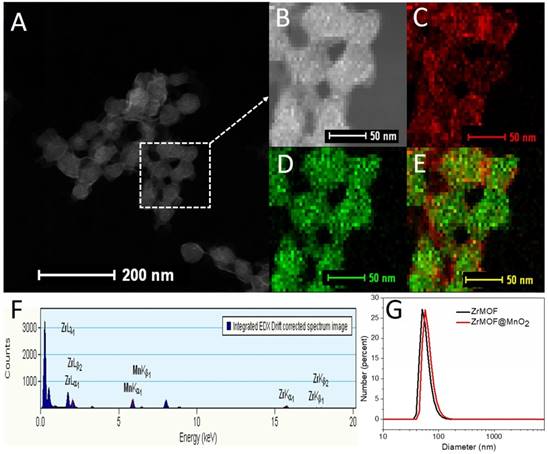 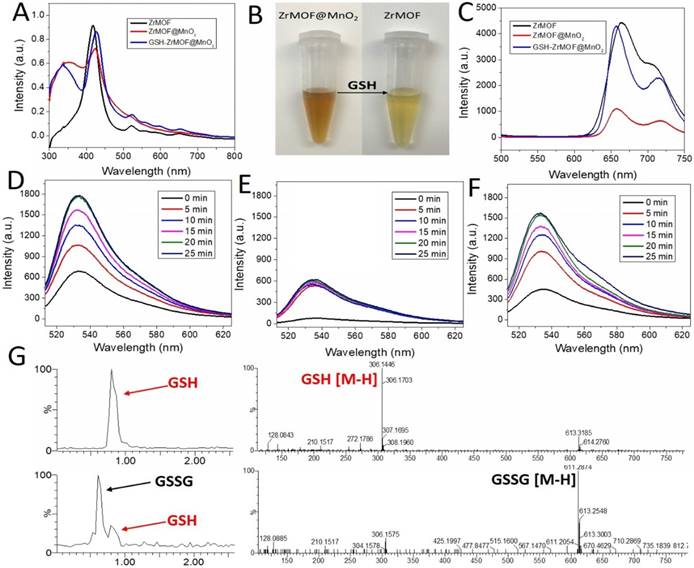 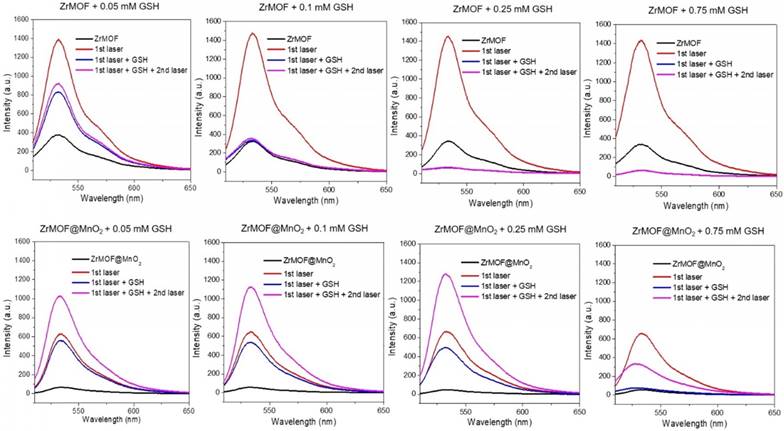 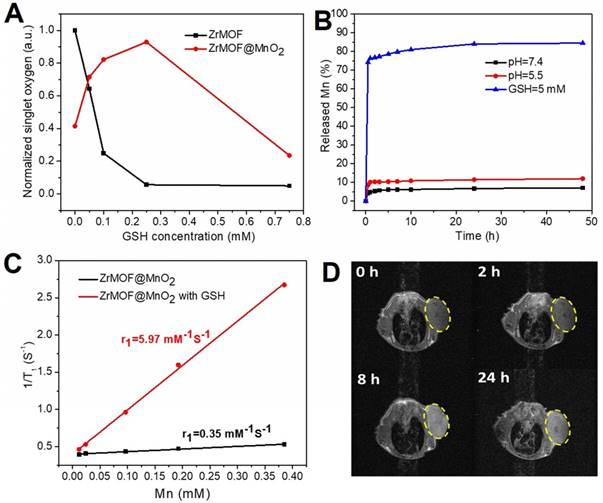 To evaluate the photodynamic therapy efficiency of ZrMOF@MnO2 hybrid nanoparticles, we next conducted MTT assay with ZrMOF@MnO2 using ZrMOF nanoparticles as control. As shown in figure 7A, ZrMOF@MnO2 displayed higher cytotoxicity ability compared to ZrMOF under same laser irradiation. In addition, the flow cytometry of cell apoptosis and stained live/dead cell also demonstrated a significantly enhanced photodynamic therapy from ZrMOF@MnO2 hybrid nanoparticles compared to ZrMOF nanoparticles with the same laser irradiation (Figure S4 and S5). Therefore, the depletion of GSH by MnO2 can maintain a high level of singlet oxygen generated by ZrMOF, thus improving the cell apoptosis efficiency.

The reduction of MnO2 by GSH not only depletes GSH to enhance the photodynamic therapy efficiency but also offers us an opportunity to take advantage of the reduction product, Mn2+, for magnetic resonance imaging-guided photodynamic therapy. We first studied the release behavior of Mn in vitro using ICP by treating ZrMOF@MnO2 with sodium acetate (pH=5.5) and GSH (5mM) which are similar with the tumor microenvironment. As shown in figure 6B, a negligible release of Mn (7%) was observed after 48 hours when pH=7.4. Although MnO2 can be decomposed by acid, pH=5.5 is not strong enough to quickly decompose all MnO2 shell on the surface of ZrMOF nanoparticles. Only about 12% of Mn was released after 48 hours when pH=5.5. However, MnO2 is very sensitive to GSH. About 75% of Mn was released in 1 hour when GSH=5 mM. After 24 hours, the Mn release reached 84% which is almost the maximal level (figure 6B). Thus, GSH plays a major role to decompose MnO2. T1 relaxivity were compared with and without treatment of GSH. A much higher longitudinal relaxivity r1 was obtained when MnO2 shell of ZrMOF@MnO2 were reduced to Mn2+ in figure 6C, indicating that a GSH-stimulative activation of T1 contrast can be developed for tumor imaging-guided therapy. To test the potential of ZrMOF@MnO2 hybrid as an MRI contrast agent, PEGylated ZrMOF@MnO2 hybrid nanoparticles were intravenously given to mice with U87MG tumor. Figure 6D showed a significant T1 contrast improvement at the 8th hour after injection from the time dependent T1-weighted images of mice, indicating the tumor accumulation of ZrMOF@MnO2 hybrid nanoparticles and the reduction of MnO2 to Mn2+ by GSH. Considering both the Mn release behavior and T1 contrast information, the laser irradiation for in vivo photodynamic therapy was conducted at the 24th hour after intravenous injection. 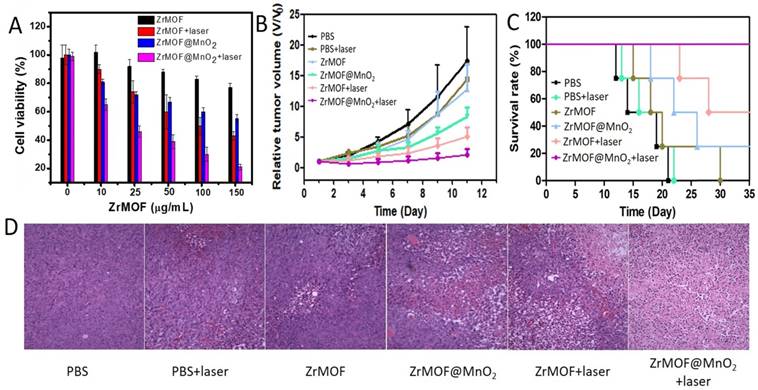 In conclusion, we have developed a facile in-situ growth method to grow MnO2 on the surface of MOF nanoparticle and obtained a core-satellites structure with fluorescence off and on function and a core-shell structure with photodynamic activity off and on function. MnO2, as an efficient quencher, not only depressed the fluorescence of dye-contained ZIF-8 but also inhibited the generation of singlet oxygen of porphyrinic ZrMOF. Moreover, we figured out how MnO2 and GSH affect the singlet oxygen generation and achieved an enhanced photodynamic activity. Although the quenching of generated singlet oxygen by MnO2 and GSH is harmful to the photodynamic therapy, an enhanced photodynamic therapy was achieved from ZrMOF@MnO2 hybrid nanoparticles by balancing the MnO2 and GSH. Overall, these results demonstrate a rational design of core-shell ZrMOF@MnO2 hybrid to reduce the intracellular GSH and trigger an enhanced photodynamic cancer therapy. This work highlights the impact of inorganic nanomaterial on the MOF properties and provides insight to the rational design of multifunctional MOF-inorganic nanomaterial complexes.

Synthesis of ZIF-8: In a typical synthesis of 50 nm ZIF-8 nanoparticles, Zn(NO3)2 (150 mg) was dissolved in 7 mL of methanol. Then, 2-methylimidazole (330 mg) was seperately dissolved in 7 mL of methanol, and the resulting solution was injected into the Zn solution with vigorous stirring. After 5 minutes, the mixture turned cloudy. The reaction was stopped and the ZIF-8 nanoparticles were washed with methanol and resuspended in DMF for further use.

Synthesis of zirconium-based porphyrinic MOF (ZrMOF) nanoparticles: In a typical synthesis, ZrOCl2 (30 mg), meso-tetra(4-carboxyphenyl)porphyrin (TCPP) (10 mg) and benzoic acid (270 mg) were dissolved in 10 mL of DMF in a 20 mL vial. The solution was sonicated and incubated in an oil bath at 90°C for 5 h. The resulting product was collected by centrifugation, washed with DMF, and resuspended in DMF for further use.

In vitro cytotoxicity study: MTT assay was conducted to investigate photodynamic therapy and cytotoxicity. Typically, U87MG cells were seeded in a 96-well plate at a concentration of 5,000 cells per well and cultured at 37 °C, 5% CO2 for 24 h. The cells were washed with fresh medium and then corresponding MOF nanoparticles were added. The cells with MOF nanoparticles were incubated at 37 °C, 5% CO2 for 48 h. Then, 10 µL of MTT (5 mg/mL in PBS) was added to the cells and incubated for 4 h. Finally, the medium was replaced with 100 µL of DMSO. The absorbance of each well was measured at 490 nm with a plate reader.

Confocal microscopy: The U87MG cells were first seeded in an 8-well Lab-Tek cover-glass slide with a concentration of 25,000 cells per well. MOF nanoparticles were added and incubated with cells for 2 hours at 37 °C, 5% CO2. After washing with PBS for three times, Z-Fix solution was added to fix the cells at 37 °C, 5% CO2 for 20 min. Mounting medium with DAPI was then added to stain for 30 min. Confocal images were obtained from a fluorescence microscope (Zeiss LSM 780).

Live and dead assay: Cell live/dead assay was conducted with a staining kit. U87MG cells (25,000) were seeded in an 8-well Lab-Tek cover-glass slide for an overnight incubation. ZrMOF and ZrMOF@MnO2 nanoparticles were added and incubated with U87MG cells for 5 hours. Subsequently, laser irradiation (650 nm, 0.2 W/cm2) was applied for 5 min. The Calcium AM/PI working solutions were added to cells and incubated for 30 min. The cells were then washed with PBS after removing the cell culture media. The slides were finally observed under a fluorescence microscope.

The supplementary material includes the characterization data of XPS, TEM, Flow cytometry, Confocal imaging, and XRD used in this study.