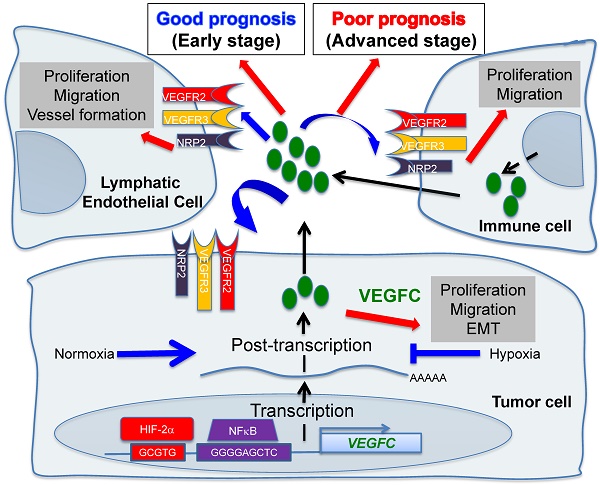 Hypoxic zones are common features of metastatic tumors. Due to inactivation of the von Hippel-Lindau gene (VHL), renal cell carcinomas (RCC) show constitutive stabilization of the alpha subunit of the hypoxia-inducible factor (HIF). Thus, RCC represents a model of chronic hypoxia. Development of the lymphatic network is dependent on vascular endothelial growth factor C (VEGFC) and lies at the front line of metastatic spreading. Here, we addressed the role of VEGFC in RCC aggressiveness and the regulation of its expression in hypoxia.

Methods: Transcriptional and post transcriptional regulation of VEGFC expression was evaluated by qPCR and with reporter genes. The involvement of HIF was evaluated using a siRNA approach. Experimental RCC were performed with immuno-competent/deficient mice using human and mouse cells knocked-out for the VEGFC gene by a CRISPR/Cas9 method. The VEGFC axis was analyzed with an online available data base (TCGA) and using an independent cohort of patients.

Conclusion: Our study revisited the admitted dogma linking VEGFC to tumor aggressiveness. We conclude that targeting VEGFC for therapy must be considered with caution.