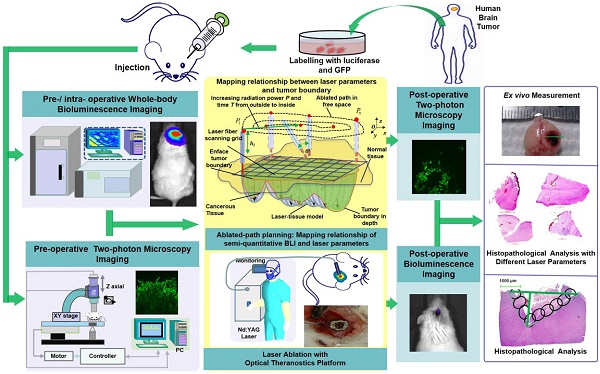 Brain tumor delineation and treatment are the main concerns of neurosurgeons in neurosurgical operations. Bridging the gap between imaging/diagnosis and treatment will provide great convenience for neurosurgeons. Here, we developed an optical theranostics platform that helps to delineate the boundary and quantitatively analyze glioblastoma multiforms (GBMs) with bioluminescence imaging (BLI) to guide laser ablation, and we imaged the GBM cells with two-photon microscopy (TPM) to visualize the laser ablation zone in vivo.

Methods: Laser ablation, using the method of coupled ablated path planning with the guidance of BLI, was implemented in vivo for mouse brain tumors. The mapping relationship between semi-quantitative BLI and the laser ablation path was built through the quantitative tumor burden. The mapping was reflected through coupled ablated path planning. The BLI quantitatively and qualitatively evaluated treatment using laser ablation with the appropriate laser parameters and laser-tissue parameters. These parameters were measured after treatment. Furthermore, histopathological analysis of the brain tissue was conducted to compare the TPM images before and after laser ablation and to evaluate the results of in vivo laser ablation. The local recurrences were measured with three separate cohorts. The weights of all of the mice were measured during the experiment.

Results: Our in vivo BLI data show that the tumor cell numbers were significantly attenuated after treatment with the optical theranostics platform, and the delineation of GBM margins had clear views to guide the laser resection; the fluorescence intensity in vivo of GBMs quantitatively analyzed the rapid progression of GBMs. The laser-tissue parameters under guidance of multimodality imaging ranged between 1.0 mm and 0.1 mm. The accuracy of the laser ablation reached a submillimeter level, and the resection ratio reached more than 99% under the guidance of BLI. The histopathological sections were compared to TPM images, and the results demonstrated that these images highly coincided. The weight index and local recurrence results demonstrated that the therapeutic effect of the optical theranostics platform was significant.