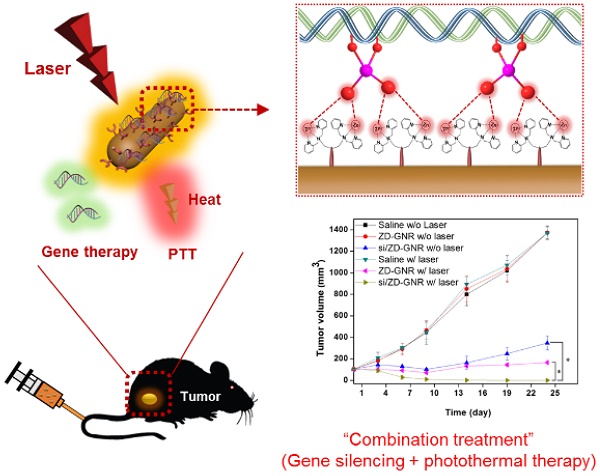 Combination cancer treatment has emerged as a critical approach to achieve remarkable anticancer effect. In this study, we prepared a theranostic nanoformulation that allows for photoacoustic imaging as well as combination gene and photothermal therapy. Gold nanorods (GNR) were coated with dipicolyl amine (DPA), which forms stable complexes with Zn2+ cations. The resulting nanoparticles, Zn(II)/DPA-GNR, recognize phosphate-containing molecules, including siRNA, because of the specific interaction between Zn(II) and the phosphates. We chose anti-polo-like kinase 1 siRNA (siPLK) as our example for gene silencing. The strong complexation between Zn(II)/DPA-GNR and siPLK provided high stability to the nano-complexes, which efficiently delivered siRNA into the targeted cancer cells in vitro and in vivo. The particle served as a theranostic agent because the GNRs of nano-complexes permitted effective photothermal therapy as well as photoacoustic imaging upon laser irradiation. This gene/photothermal combination therapy using siPLK/Zn(II)DPA-GNRs exhibited significant antitumor activity in a PC-3 tumor mouse model. The concept described in this work may be extended to the development of efficient delivery strategies for other polynucleotides as well as advanced anticancer therapy.