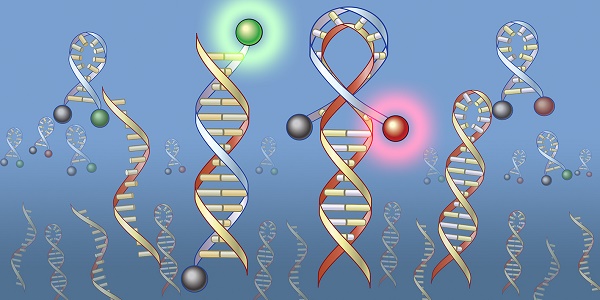 MicroRNAs (miRNAs) are small, noncoding RNAs that post-transcriptionally regulate gene expression and are recognized for their roles both as modulators of disease progression and as biomarkers of disease activity, including neurological diseases, cancer, and cardiovascular disease (CVD). Commonly, miRNA abundance is assessed using quantitative real-time PCR (qRT-PCR), however, qRT-PCR for miRNA can be labor intensive, time consuming, and may lack specificity for detection of mature versus precursor forms of miRNA. Here, we describe a novel double molecular beacon approach to miRNA assessment that can distinguish and quantify mature versus precursor forms of miRNA in a single assay, an essential feature for use of miRNAs as biomarkers for disease. Using this approach, we found that molecular beacons with DNA or combined locked nucleic acid (LNA)-DNA backbones can detect mature and precursor miRNAs (pre-miRNAs) of low (< 1 nM) abundance in vitro. The double molecular beacon assay was accurate in assessing miRNA abundance in a sample containing a mixed population of mature and precursor miRNAs. In contrast, qRT-PCR and the single molecular beacon assay overestimated miRNA abundance. Additionally, the double molecular beacon assay was less labor intensive than traditional qRT-PCR and had 10-25% increased specificity. Our data suggest that the double molecular beacon-based approach is more precise and specific than previous methods, and has the promise of being the standard for assessing miRNA levels in biological samples.

MicroRNAs (miRNAs) are short (~19-23 nucleotides), conserved, non-coding RNAs that repress translation or induce degradation of specific messenger RNAs (mRNAs) [1-3]. MiRNAs have been identified across every plant and animal species and have been shown to regulate a multitude of cellular processes. MiRNA biogenesis begins in the nucleus where primary miRNA transcripts (pri-miRNAs) are generated from various genomic loci [4] by RNA polymerase II and III [5]. Subsequently, the Microprocessor complex, consisting of the RNase II enzyme, Drosha, and its cofactor DGCR8 (DiGeorge Syndrome Critical Region 8), cleaves the pri-miRNA. The resulting product is a pre-miRNA, which varies in length between 60-70 nucleotides. The pre-miRNA has a stem-loop hairpin structure that consists of a double stranded stem (approximately 33 nucleotides) and a single stranded loop [6]. Pre-miRNA is exported from the nucleus to the cytoplasm by Exportin-5-Ran-GTP where a second RNase, Dicer, cleaves the pre-miRNA terminal loop to produce a transient double stranded miRNA. The two strands separate into two complimentary mature miRNAs (5'-3' and 3'-5') [7], either of which may become complexed with the RNA-induced silencing complex (RISC). Importantly, through variations in miRNA processing, a single miRNA genomic locus can generate multiple mature miRNAs that differ by only a few nucleotides; these variants are known as isomiRs (miRNA isoforms). miRNAs guide the RISC to specific mRNA targets through base pairing of the miRNA seed sequence, defined as nucleotides 2-8 of the 5' end, with the complementary sequence in the target mRNA. This interaction can either inhibit target mRNA translation or induce its degradation [8]. Since miRNA-mediated gene suppression typically requires only seven to eight nucleotides, a single miRNA can regulate the expression of hundreds of mRNAs [9] and many different miRNAs can regulate a single mRNA [10].

The discovery of miRNAs and their function has enhanced our understanding of the complexity of gene regulation in health and disease. Physiologic concentrations of mature and precursor forms of miRNA vary depending on species, tissue, cell type and disease state with ranges from nanomolar to fetamolar concentrations [11]. To date, a multitude of different techniques have been used to detect and quantitate miRNA, including northern blotting, qRT-PCR, miRNA microarrays, next generation sequencing, and molecular beacons. Each quantitative method has advantages and disadvantages. Northern blotting is the oldest of these techniques but it has low throughput, it is time consuming and requires large quantities of RNA (8 μg or more) [4]. Most northern blotting techniques are less sensitive than newer miRNA detection methods; approximately 100,000 copies of RNA sequence are required for detection by blot hybridization compared to a single copy of RNA needed in other methods. In addition, northern blotting does not multiplex well. qRT-PCR is currently the standard for quantitating miRNA. It is simple and typically very specific and sensitive. However, qRT-PCR often lacks the ability to distinguish isomiRs unless the qRT-PCR protocol is altered, thereby increasing its cost and making it less time-efficient [12, 13]. Microarrays have emerged as a high throughput, comprehensive option for quantitating miRNA, but they are expensive and have limitations in sensitivity and specificity. Also, microarray data still need to be validated by other methods such as qRT-PCR or northern blot. Next generation deep sequencing (NGS) is a highly sensitive and specific method for miRNA quantification. Using current technology, NGS is able to generate high quality data from as little as 10 ng of miRNA. However, NGS is expensive and requires a significant amount of bioinformatics and biostatistical support. As with miRNA microarrays, NGS results should be validated by northern or qRT-PCR analysis. Therefore, there is a need for new miRNA detection and quantification assays that are dynamic, sensitive and specific, but also time- and cost-efficient. Molecular beacons (MBs) have shown to have these features. 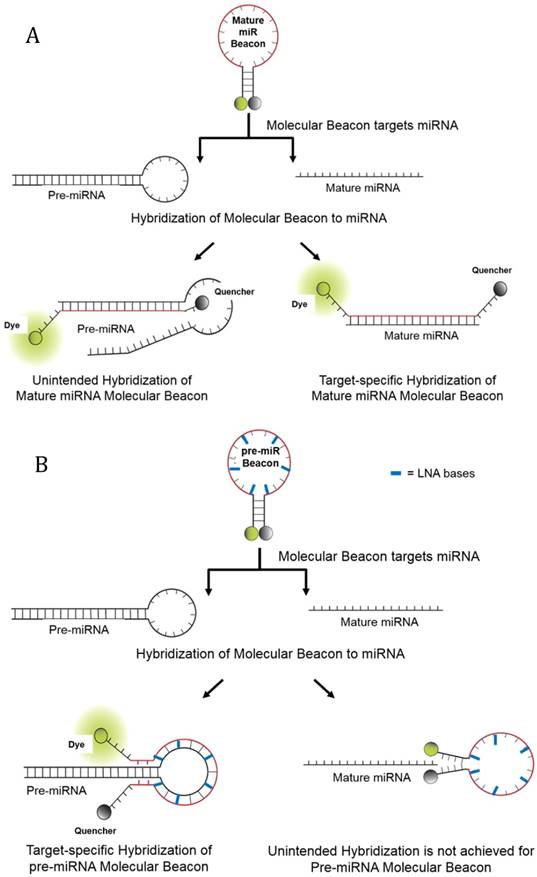 To determine the specificity of the molecular beacons, the sequences of wild-type mature miR-21 and miR-27b, and pre-miR-21 and pre-miR-27b were synthesized by Integrated DNA Technologies as synthetic miRNA targets. As shown in Table 1, each wild-type target also had a complementary LNA/DNA sequence designed that was used as a blocker in the hybridization assays. Specifically, for the mature miR-21 blocker, eight of its 22 nucleotides were LNA, while mature miR-27b blocker had six of its 20 nucleotides as LNA. Similarly, pre-miR-21 blocker and pre-miR-27b blocker had six LNA bases in each of their sequences. All synthetic nucleotide sequences were suspended in nuclease-free water (1 nmol/µL) and stored at -80ºC.

Human aortic endothelial cells (HAECs) were cultured in EBM-2 media in the presence of 5% CO2 at 37°C and were used between passages 4-8. RNA from the cells was extracted using the miRNeasy kit (Qiagen) according to manufacturer's instructions. The miRNA abundance was assessed by the single or double molecular beacon assay and qRT-PCR.

RNA from whole blood was extracted using the PAXgene Blood RNA Kit (Qiagen) according to manufacturer's instructions. The miRNA abundance was assessed by qRT-PCR and double molecular beacon methods.

Molecular beacon hybridization to synthetic miRNA targets was evaluated in a final volume of 50 µL containing PBS (pH 7.0) and 200 nM molecular beacon. Reactions were performed in a Tecan Safire plate reader (384-well flat bottom tray) with continuous shaking at 37ºC for 60 minutes before the intensity of the fluorescence was determined.

Mature molecular beacon specificity was tested in hybridization assays that included synthetic oligos designed to block (oligo blockers, 200 nM; Table 1) binding of molecular beacons to their target mature or pre-miRNAs. Hybridization conditions (200 nM of molecular beacon; 0-100 nM of mixed target miRNA) and fluorescence detection methods were similar to those described above. The oligo blocker sequences shown in Table 1 are comprised of LNA bases and are complementary to mature and precursor forms of specific miRNAs. The use of DNA/LNA blockers that were complementary to mature and precursor forms of specific miRNAs allowed for competitive binding of the oligo blockers to its target sequence. Thus, target sequences that were not bound to blockers could subsequently hybridize to a molecular beacon.

When quantitating pre-miRNA and mature miRNA abundance using the double molecular beacon assay in the whole blood samples, 500 nM of molecular beacon was use for hybridization while fluorescence detection methods were similar to those described above. 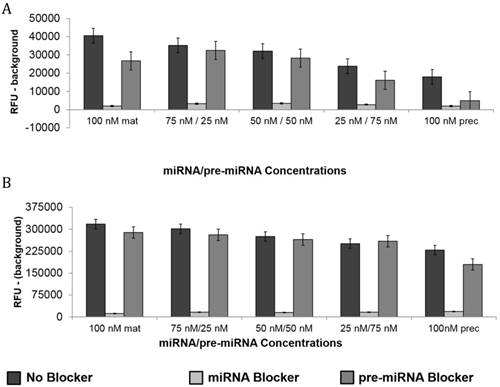 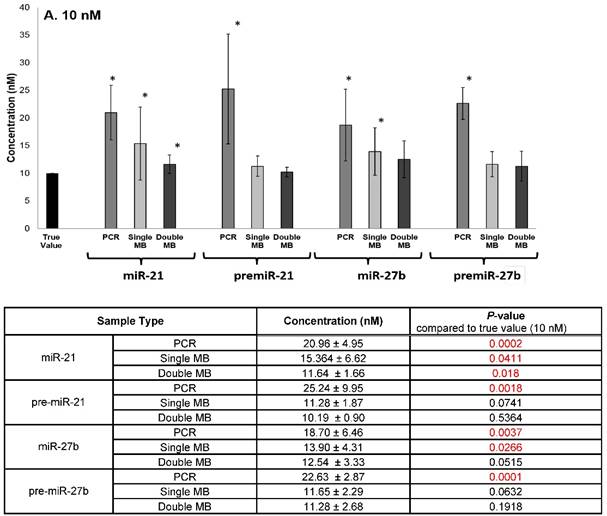 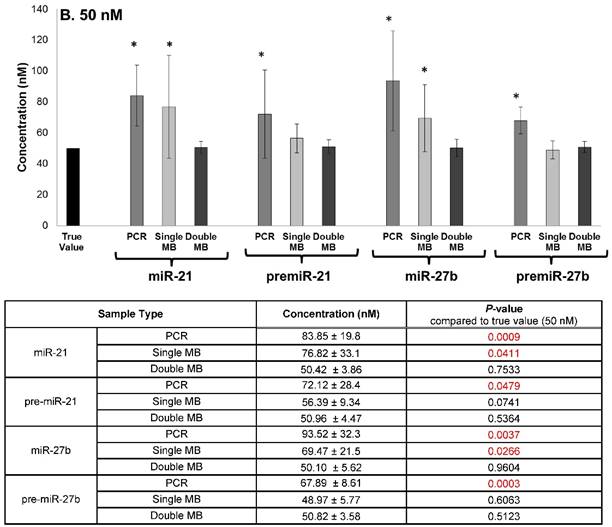 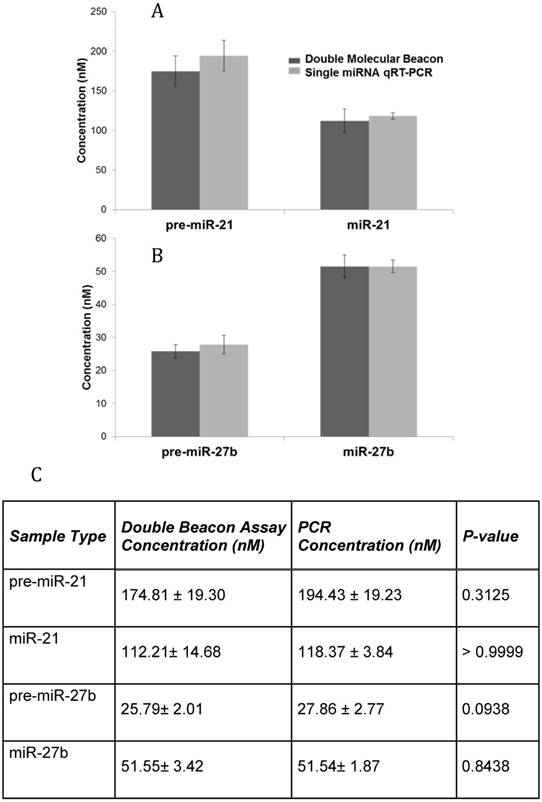 In this study, we demonstrated that the double molecular beacon assay could distinguish between mature miRNA and pre-miRNA species as well as effectively and efficiently assess miRNA levels in a sample containing a mixture of mature and precursor forms of miRNA. This assay has the potential to be a powerful tool for quantifying miRNA expression in clinical specimens. Specifically, we showed that the double molecular beacon assay was effective for quantifying different miRNAs forms within a concentration range of 0.5-200 nM. 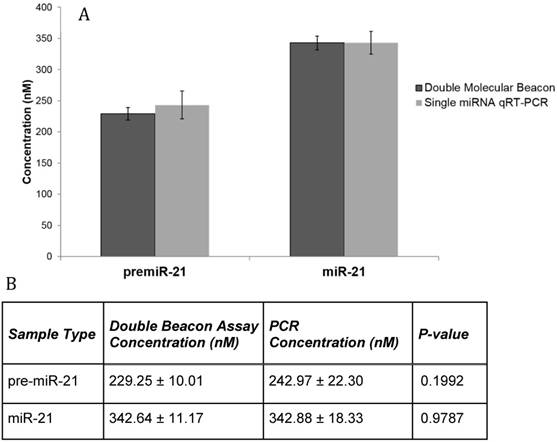 The use of the double molecular beacon assay to quantitate miRNA is preferable to other methods because it can accurately assess differences in miRNA levels within mixed populations. The hybridization of molecular beacons to target miRNA and the measurement of fluorescence can be performed relatively quickly, in approximately 20-30 min, which is one-third the time of traditional qRT-PCR. Other conventional methods for miRNA detection, such as Northern Blotting, microarrays, and NGS, are able to quantitate miRNA expression in the fetamolar range, but they all have lower specificity with higher cost. These conventional methods also have not been thoroughly assessed for their ability to successfully multiplex for both mature and precursor forms of a miRNA while maintaining their sensitivity, specificity, time effectiveness, and cost [32].

In addition to the novelty of this method, it is also versatile. We demonstrated that this method can successful quantitate pre-miRNA and mature miRNA from synthetic targets, RNA isolated from cells (Figure 6) and even RNA isolated from whole blood (Figure 7). This versatility indicates that the method can not only be used as a laboratory research tool but also as a potential clinical tool.

Overall, the double molecular beacon assay is highly specific when detecting both mature and precursor forms of miRNA in a biological sample. Potential other applications of a double molecular beacon assay are quantitation of miRNA variants, such as isomiRs, which vary from the archetypal miRNA by 1-3 nucleotides. The advantage of quantitating isomiRs using molecular beacons lies in their ability to distinguish targets with single nucleotide differences and their ability to quantitate isomiRs that are expressed at very low concentrations. Therefore, this innovative double molecular beacon-based miRNA detection offers a hybridization assay format that is sensitive, specific, fast, easy to multiplex and capable of distinguishing mature and pre-miRNAs for both clinical and research use.

This work was supported by the National Heart Lung and Blood Institute of the National Institutes of Health as a Program of Excellence in Nanotechnology (HHSN268201000043C to GB) and a VA Merit Award (I01 BX000704 to CDS).